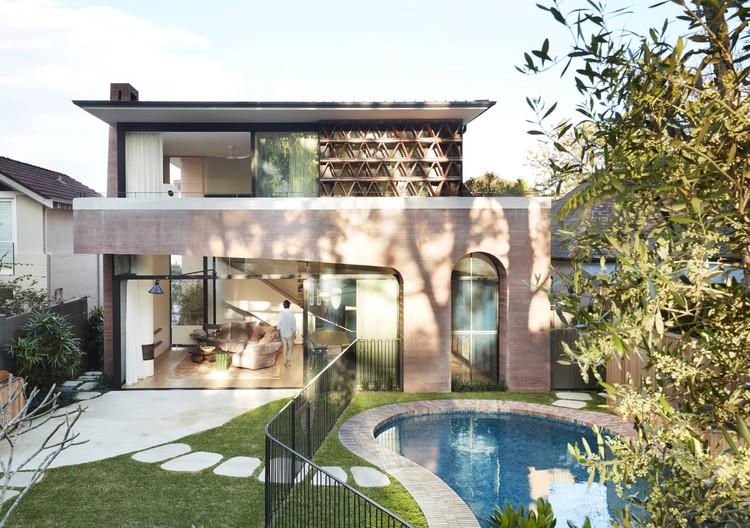 Text description provided by the architects. Under the reign of Queen Victoria, the residential architecture of the British colonies was immersed in a nostalgic and late romantic borrowing of gothic architecture in its idealised interpretations of John Ruskin’s essay, The Seven Lamps of Architecture1, where the skill and craft of the builder were more important than the architect’s conceptualisation. Lacework, fretwork, intricate plaster detailing, and elaborate timberwork was the currency of the Victorian colonial home. In a modest way, this home in the Sydney beachside suburb of Bronte possessed many of the traits of that late Victorian style, and when called upon to provide it with a new lease of life, for Luigi it brought to mind a holiday villa of his childhood, located on a hilltop overlooking Lago Maggiore (Italy) and named La Casa Rosa for its washed pink render.

In true Victorian neogothic spirit, we gathered together a team highly skilled in their respective crafts: Will Dangar oversaw the landscaping, aided by his creative stonemason, Nazih; Juliette Arent and of Arent & Pyke and Genevieve Hromas brought their love of intricate detail and the input of her talented team; Callum Coombe lent his skill in forming a brise soleil of otherwise redundant terracotta roof tiles that he first honed in the construction of The Beehive2; Buildability Constructions assembled a crew of fine carpenters and farmworkers; and we must not forget the amazing Stiven of Sydney Joinery, whose refined joinery is an integral feature of every room, together with the Architecture Stone Concept’s stonemasonry.

Craftiest of all was our Client, whose brief did not simply seek to replace later additions to the rear of the property and provide a new main living space and a master bedroom suite and study in the first-floor additions, but who challenged us to provide their family with a home that fitted their dreams and ambitions. Every aspect of the house is now a depiction of their aspirations; their Le Vie en Rose3 perception of the world. There was no wastage in this project. The house is not large; there are no unnecessary rooms; no unnecessary gadgetry.

We made no alterations to the existing rooms at the front of the original house, and the new additions to the rear are well proportioned in relation to that structure. We retained the existing 1980s pool and preserved the dense backyard vegetation. We recycled the roof tiles to construct the brise soleil and would have retained the terracotta roof tiles to the front of the house had the roofer not been so zealous in convincing the client to replace them.

We used second-hand timber windows to the Victorian front façade and specified the reuse or recycling of demolition materials. This house is air conditioning-free; instead ceiling fans are employed for mechanical cooling in combination with good insulation, large eaves, and sun shading to all windows; trees and water help to cool the backyard space. Through the short winter months, heating is provided by hydronic panels.

The new structure to the rear of the property is constructed in pink concrete, achieved by adding a mineral pigment to the whole thickness of the material. The name of the pigment, ‘Flamingo’ fits well with the two concrete feet on the ground and the long cantilevered neck of the rear elevation. For Luigi, La Casa Rosa holds many happy memories at his ‘young age’, hopefully, La Nuova Casa Rosa will hold similar joys for the two young children who will grow up there. 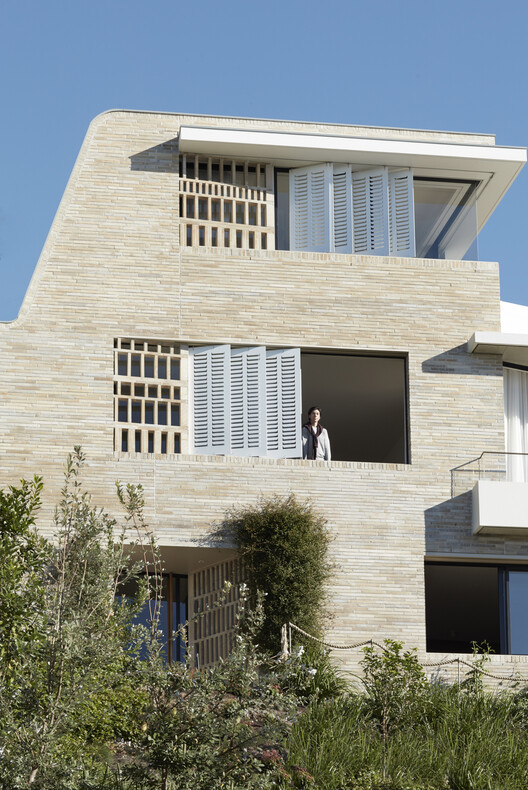