Save
Caddies & Clubhouses: The Architecture of Golf
Share
Or
Copy

The architecture of golf is directly tied to the landscape. As one of the few sports with no standardized playing area, its clubhouses and structures are usually unique to each course. Prioritizing views and access, golf architecture tends to be exclusive, especially when many courses are not open to the public. Clubhouses make room for players and spectators to gather and socialize while they overlook the course from multiple angles. 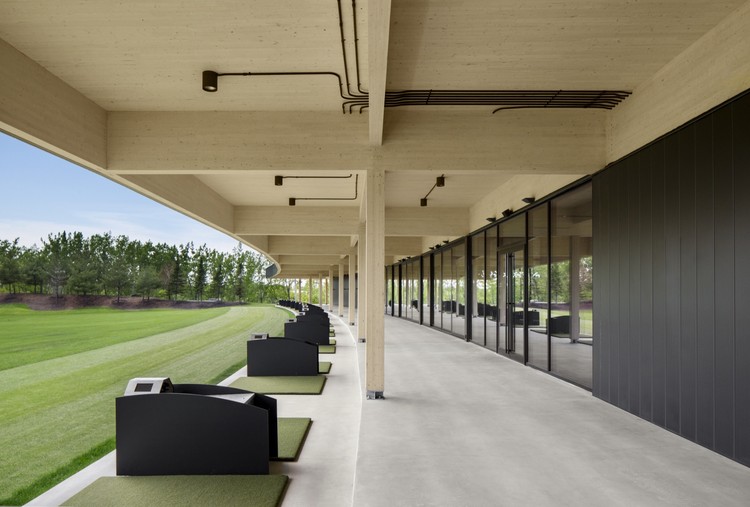 Golf has existed in various forms for centuries, but the modern game as we know it has evolved to include expansive fairways with scenic vistas and new amenity buildings. The 20th century brought a sharp rise in the sport’s popularity, which in turn led to an increase in new clubhouse designs. Built with lounges, bars, shops and storage spaces, these structures are designed around relaxation and recreation. Looking at the architecture of golf from around the world, the following projects showcase clubhouse designs exploring precision, balance and open views to the course.

The Ayla Golfclub takes inspiration from the natural dunescapes and mountains of the Jordanian desert as well as the architectural heritage of the ancient Bedouin. The innovative and organic design of the building forms the iconic core of the Ayla Oasis mixed-use resort development in Aqaba city.

Located within the Ozark Mountains, the Blessings Golf Clubhouse and Guardhouse is a stand-alone structure set at the base of the hill. Acting as a type of covered bridge from the north-facing mountain ridge into the Osage Indian archaeological preservation zone, the building creates an entry portal that operates as a breezeway framing the eighteenth green.

This scheme was made to redevelop Feldon Valley, with the final phase of works culminating in the opening of a new boutique hotel and four woodland lodges. Situated in the Cotswolds Area, 3 miles east of Shipston-on-Stour, Feldon Valley traces its origins to the early 1990s, when a group of enterprising local farmers and businessmen took the decision to convert agricultural land into a golf club.

This project was designed to integrate with the surroundings by balancing the built architecture with the topographic, as well as using traditional materials and construction techniques. Some qualities of the environment have also been brought into the interior and vice versa. The result is a building that reinterprets and respects the landscape.

The Wembley Golf Course project involved replacement of the existing facilities with a range of hospitality offerings, function spaces, new changerooms and office space. Key considerations for the design were to improve the entry sequence of the precinct and to unify the buildings on a central axis.

For the Olympic clubhouse, the team chose to design a building organized like a comfortable veranda, dissolving the limits between the landscape, the building, and the users. They created a plaza which articulates the course with the programmatic volumes around it. The proposal also utilizes traditional Brazilian architectural elements like parasols, brise-soleis and cobogós, in order to create comfortable spaces between interior and exterior.

The building of a golf course club is located in the district of Ežeraičiai in the area of ‘the V Golf Club’, which is designed according to the standards of the American Golf Association. The volume of the building is informed by two horizons - a prominent terrace and a flat roof. As a contrast to the surrounding environment, these two elements emphasize the strict horizontal character of the building.