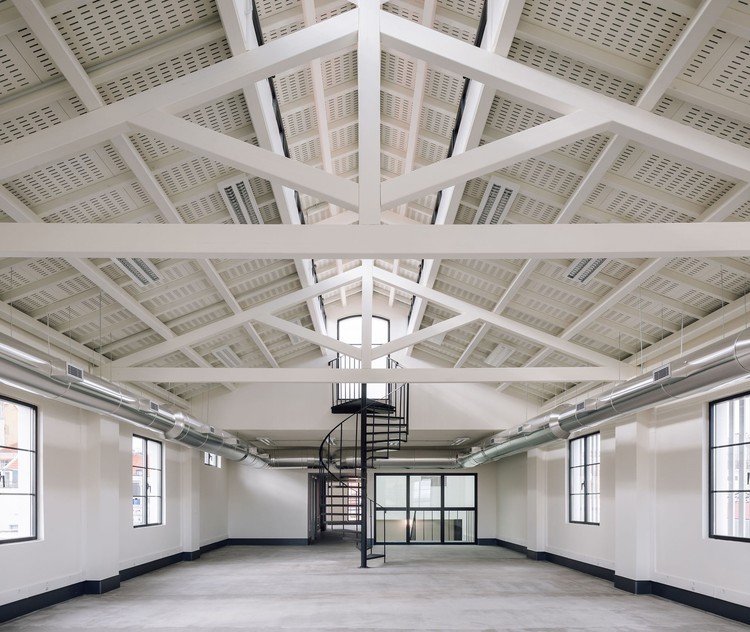 Text description provided by the architects. Conversion of an old four-storey tin factory into an office building. Located in the riverside area of Lisbon, in Santos, the building is a reflection of Lisbon's industrial history and the surviving typologies of factories and warehouses from the early 20th century.

Built in the 1930s, the building is defined by a regular reinforced concrete structure, with an orthogonal plan, and by the main elevation of symmetrical composition, with three spans per floor. Having been unoccupied for years, the building was generally dilapidated and, inside, quite uncharacteristically from an architectural point of view.

Although with particularly high ceilings, the space had very little lighting and natural ventilation on the two lower floors, which was, at the outset, an obstacle to the intended use. Creating habitable conditions, especially by enhancing the distribution of natural light, was one of the main objectives for the project. In response to this question, a new stairwell was created, covered by a large skylight, which doubles as a lightwell, allowing natural lighting to reach all floors. The stairs were designed in a metallic structure, using the railing for the steps, allowing the passage of light to the lower floors.

At the heart of the building, the floors were left completely wide and undivided, allowing great flexibility and natural fluidity of the space. In addition to the stairwell/lightwell, the floors are only occupied with a core of sanitary facilities, elevator, and floor pantry. All interior spaces were finished with screed concrete on the floor, raw and durable, in line with the industrial characteristics of the building. The top floor stands out for maintaining the gable roof, whose original wooden structure (trusses and frameworks) has been completely restored. Therefore, this space has a generous ceiling height and a very particular spatiality, being one of the main memories of the building and its industrial past.

The remaining half of the penthouse is an accessible terrace, another highlight in the building. With access via two spiral stairs, one indoor and one outdoor, it allows you to enjoy an excellent panoramic view over the rooftops of Lisbon and the Tagus river. In order for the roof terrace to be totally clean and without equipment, a lowered patio on the lower floor, covered with a railing, was created to house the ventilation and air condition units.

On the façade, the intervention maintained and restored as much as possible the composition of the original architectural elements, such as stonework, friezes, cornices, and window frames. Lime mortars were used in the surface consolidation renders and later painting with lime base paint. All the spans (doors and windows) in the façade plans were replaced by metallic frames, in keeping with the strong industrial character of the building.

The rehabilitation respected the history of the place, creating a changeable and multipurpose workspace that can flexibly accommodate a wide variety of occupations and activities. Having preserved many of its original features, the building now offers a feeling of physical grandeur and movement. 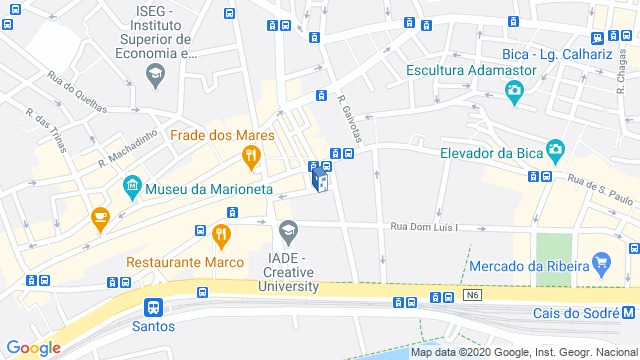 Location to be used only as a reference. It could indicate city/country but not exact address.
Share
Or
Copy
About this office
LADO Arquitectura e Design
Office
•••