When a material runs its course and becomes obsolete, whether because of wear and tear, a change of style, a tear-down, or a remodel, many are tempted to simply toss it into a scrap heap and send it to the landfill. In the grand majority of cases, however, these materials can be repaired, recycled, and reused in a vast array of creative endeavors. Of course, depending on the material and its characteristics, this can also present a challenge. In the case of windows and doors, particular care must be taken to keep them intact throughout the dismantling or demolition process and even afterwards, an inspection may be necessary to determine their viability for future use. Of course, many avoid the path of re-utilization altogether and opt for new materials that make for an easier and more uniform project.

A prime example of recuperated elements being effectively applied to new designs is the Sala Beckett project by the Flores & Prats studio. With an inventory of more than 100 plans and blue prints, the firm cataloged the building's older elements that, before the revitalization, were destined for the trash pile. By doing so, they were able to create an inventory of, not only doors and windows, but other elements like doorknobs and tiles that were dismantled and then reapplied to the new project.

In keeping with this theme of re-utilization in architecture, in this article we're highlighting 10 projects that re-purpose old doors and windows and give them new life through innovative and resourceful designs.

"A peculiar metallic lattice wraps around the entire building, made up of a variety of recycled materials that each bring their own texture and touch to the project. We imagined it as a multi-colored, metallic cage  holding everything in--a new take on the Faraday cage."

“With the principles of “Rustic Luxury” in mind, UXUS designed a dining space that celebrates the essential beauty and goodness contained in simple things... 500 salvaged antique Hungarian shutters line the walls and ceiling, enveloping diners in rustic textures and colors, whilst billowing white curtains punctuate and soften the space."

“Old shutters give the house's outer facade a distinctive appearance. These types of shutters have been commonplace in Vietnam for decades thanks to the ventilation they provide. They are arranged on the facade in such a way to provide pops of color while simultaneously blending in with the antique elements of the surrounding area...”

“Kamikatsu in Tokushima prefecture is committed to zero waste, aiming towards a society characterized by sustainable recycling. To give the building a local touch, shutters and windows taken from the town's abandoned houses make up the towering facade that faces the town, allowing the public house to both literally and figuratively share its light with the town whose population is, as is the case with many rural Japanese communities, in decline."

“The project looks at the idea of recycling and collage in several ways, from the very physical - like materials, energy, etc. to the intangible - like history, space and memories. The front façade sets the tone for what lies within, with a “corner of windows” made from old windows and doors salvaged from demolished houses in the city. This serves as the backdrop for the living room with a exposed concrete faceted ceiling that contrasts with the polished white marble floor inlaid with intricate brass details."

"The building was used as a low-income apartment building with 14x12m2 dwellings. After the demolition of the interior, INDEO set to work salvaging windows, doors and wooden fixtures. With an economical approach, the reuse of demolished materials became the design's core inspiration. The wooden doors and frames find their place in the outdoor furniture and the wooden deck. Each of the windows was cleaned and repainted and meticulously installed on the facade, which protects the inhabitants from street noise, direct sunlight, and also creates a certain degree of privacy."

"The house was built from scrap materials, which have as much part in its design as they do in its construction. Here, the architect experimented with antique doors, turning them into windows, tables, and much more. What were once humble fixtures in other houses have transformed into the crowning feature of this house."

“From the start, the client salvaged various wooden materials--doors, panels, windows-- in the hopes of finding a way to incorporate them into the project. In the end, they became the building's facade, combining in a harmonizing juxtapose of brick and woodwork." 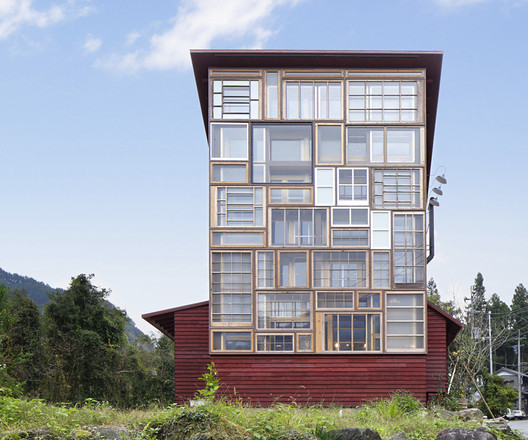