Despite a bad reputation in children's stories, straw buildings can be sustainable, comfortable, and, above all, solid and resistant. Several studies and experiments have been carried out with this agricultural waste substance, qualifying it as an potential material for the construction of walls, with good thermal, acoustic, and even structural characteristics. In addition, it is a renewable resource and easily constructed. Below, we'll talk about the characteristics of this material and how much more it would take than the breath of a big bad wolf to bring down a house made of straw.

Straw is a leftover remnant from grain production, usually wheat, rice or barley. After the edible part of the grain is harvested, the stems end up discarded and are often burned. Instead of wasting them, however, the stems can be compacted into rectangular bales, which can be stacked and used as fillers or even as self-supporting walls in a technique known as the “Nebraska” style, widely used in the 19th century on the plains of this US state. While field bales can support around 900 kg per linear meter, high density blocks of the same material, compacted by machines, are designed to support up to almost 6000 kg / m [1].

Yet it is more common to use straw as a sealing and insulation material alongside other structural materials, such as wood or steel, rather than simply on its own. In this case, the inclusion of a non-straw structure allows the construction of a roof before the straw bales are installed, which can protect the wall from water damage during construction, as we will see later.

Because it is a material formed mainly of air, straw provides excellent thermal insulation in construction. It is estimated that a well-built straw bale house can save almost 75% in heating and cooling costs [1]. Due to variations in species and in the compaction of parts, it is difficult to quantify this data exactly. But the thermal conductivity of straw is estimated to be about 0.07 / 0.09 W / ° C m, which is similar to expanded polystyrene (0.04 W / ° C m), as an example [2]. In relation to thermal inertia, bales of straw are roughly equivalent to adobe and log walls [3]. Its fire behavior is also notable: according to some tests, it was found that straw walls with cement or stucco plaster successfully met the conditions written in the ASTM Method E119-05a Fire Tests of Building Construction and Materials.

It is important to note that, because straw is an organic material, the finishes on straw walls must also be composed of 100% organic material to allow the walls to exchange air between the indoors and outdoors. Therefore, a mixture of clay, sand, and straw is generally used. Lime is also a viable option.

A limiting issue for the mass use of this method is that the straw must not be in direct contact with the moisture of the earth, which would allow moisture to rise to the walls. Two significant problems related to building straw bale walls are moisture and mold. If exposed to water, the straw can absorb water and expand, even causing cracks in the wall. To avoid this, the foundations must be raised at least 20 cm above the ground. Moreover, even in dry climates, a straw building's eaves must be relatively large, keeping the walls as protected as possible from moisture.

Another issue that can be limiting in some countries is that of adapting to existing building standards and obtaining building permits, as straw is an alternative and unconventional material. To remedy this problem, architects planning to use straw can seek the advice of professionals who have already dealt with these issues in their region.

Being 100% biodegradable, when straw buildings become obsolete and need to be demolished, its walls can decompose into the soil without major problems. But like any building material, it will only be truly sustainable if it is available locally. Therefore, it is a material perhaps best suited to rural areas, particularly those close to the grain plantations that produce this waste. If straw is not available near the the building site, the added environmental impact of transport may make another material more suitable. Knowing what materials are available locally is always a good starting point to achieve truly sustainable construction.

For more technical information on this material, visit the EBNet (Ecological Building Network) website and, for academic studies, this ScienceDirect link. 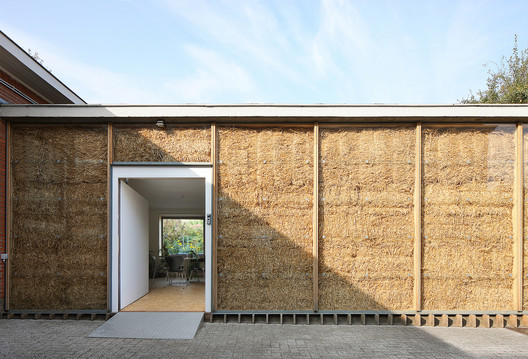