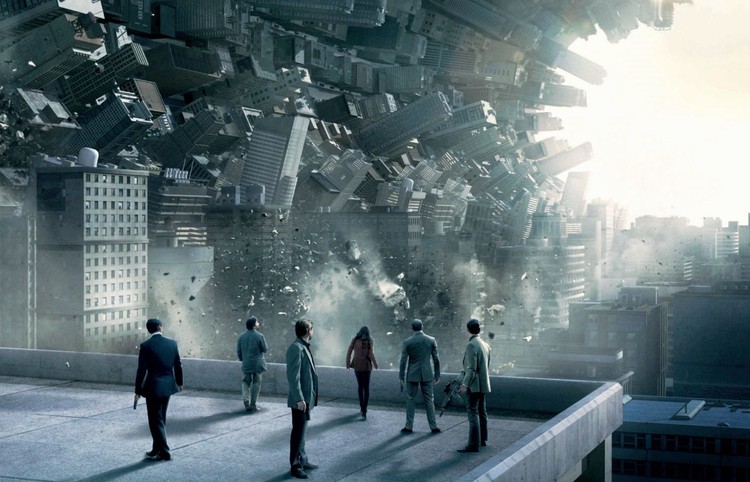 These movie genres rely more and more on technological advances in computer graphics. What used to be accomplished with three-dimensional small-scale models is now achieved with digital architectural models, special effects, and render farms, shifting a considerable amount of work and budget from pre to post-production.

Architecture has not been left out of these transformations in the film industry. Digital models and computer graphics provide more than just the ability to destroy Manhattan (always Manhattan) or build cities in space, but rather enhance narrative possibilities and help create atmospheres that can transport us into these other worlds.

Check out below six films that use a lot of green screen and architectural visualizations.

I, Robot is set in Chicago in 2035, where human beings share the city space with an increasingly large number of androids, who began to perform heavy and low-valued tasks in society, such as cleaning public areas, transportation services, and domestic work. The peaceful coexistence between man and machine is questioned when a policeman starts to investigate a crime supposedly committed by one of the robots of the powerful company US Robotics, the city's largest and most emblematic skyscraper.

The use of computer graphics and architectural visualizations contributes to the creation of sceneries that, unlike other futuristic films, is not necessarily dystopian, but represents a society that seems to have succeeded, greatly supported by the utopia of mass production, automation, and robotics. Over fifteen years after its release, parallels with today's society are inevitable - a society dominated by the delirium of technology and instant communication, that makes smartphones its chief concern.

The Day After Tomorrow

Based on the book The Coming Global Superstorm by Art Bell and Whitley Strieber, the film depicts catastrophic climatic effects following the disruption of the North Atlantic Ocean circulation. The result is a series of extreme weather events that usher in global cooling and lead to a new ice age.

Based on Frank Miller's graphic novel of the same name, Sin City is divided into six independent parts that dialogue with each other, building a larger plot. Filmed in color and later processed and rendered in black and white, the movie pays tribute to the classics of American film noir, providing a very precise adaptation of the graphic novel to the cinema.

From the urban settings to the interiors, Sin City's spaces have major importance in narrative, and its production relied heavily on computer graphics and digital architectural models. The result is a metropolitan landscape composed of a series of generic fragments, setting a background for the characters, with no recognizable trace of any real metropolis.

Considered by many to be Christopher Nolan's best film, Inception explores the realm of unconsciousness and dreams through the life of Cobb, a fugitive who specializes in stealing secrets from people's minds while they sleep. Together with Ariadne, a student of architecture whose task is to design the labyrinths of the dream world, Cobb has the mission to enter the mind of Richard Fischer, the heir to a business empire, and plant the idea of dismembering it.

The architecture and urban landscapes of Inception don't obey the rules of gravity and tangible reality; they are submitted to another set of norms, subjective and fluid, that concern the world of dreams and unconsciousness.

The original version of Blade Runner from 1982 is probably one of the most cited films when it comes to the relationship between filmmaking and urban landscape. The dystopian San Angeles (a fictional conurbation of San Diego and Los Angeles) is depicted in the movie as a dark and hazy atmosphere, marked by tall buildings, flying cars, and a profusion of screens and lights.

Star Wars: The Rise of Skywalker

The ninth and most recent episode of the Star Wars saga is on this list but could easily be replaced by any of the previous episodes. Star Wars is one of the most blockbuster series in the history of cinema. Its narrative does not focus on buildings or cities, but its constructions and urban settings across the galaxies can provide inspiration (or reverie) for architectural practice.

The intense use of computer graphics and digital models is very clear, not only in the battles between Jedis and Siths but also in the construction of the scenery, which serves as a background for the whole series - especially the trilogies that precede and follow the original, namely the titles released after 1999.