Text description provided by the architects. TENSAI is an industrial company engaged in the manufacture and marketing of domestic and industrial refrigeration equipment.

The company has been growing in recent years and now is a market leader in this sector, in Portugal and Spain, exporting to lots of countries around the world.

To meet this growth the TENSAI decided to move premises both in the manufacturing sector and the administrative sector.

The new administrative office building is located in northern Portugal in Oporto district in the town of Leça da Palmeira, a few hundred meters from the Atlantic Ocean, occupying two pre-existing houses built in the early twentieth century, part of a mostly residential area dominated by buildings with two-storeys, covered by a traditional roof. This typology is characterizing the surrounding blocks, although there have been some larger housing buildings constructed nearby.

The project is the result of the following guiding ideas:

unify formally and functionally the two buildings under one roof;

maintain the scale and proportions of pre-existing buildings as an essential factor for successful integration into the surroundings maintaining the relationship of human scale and the memory of an office building in a house: the office as the new life of the houses;

adapt the design and the new image of the buildings to new functions without losing the brand identity of the past;

The peripheral structural walls of granite of the old buildings were maintained, although, because of specific programmatic needs some interior walls were demolished.

In the original exterior volume were made the following changes:

The roof was redesigned to be obtained right-foot working in the attic and to be increased the useful area of work without increasing construction area;

The rear facade was expanded to maximize the area of offices, approaching the design to a planimetric and volumetric reinterpretation of the volume of the main facade;

It was created an open space work room on the ground floor connecting the building to the garage. The facades were designed lined by an exterior pre-existing wall of granite;

Were created two patios on the ground floor hugged by potting granite;

The requirement of only one entrance led it to the corner of the crossing of the two streets.

Thus the project attempted to unite old and new, creating inter-relationships of proportion and alignment, suggesting complicity between the various parties, by making parts of the whole and vice versa.

With the materials, it was taken the same compromise between the exterior and interior through the separation of the different plans and materials through "void". In other words, a third material that made the transition between two materials on the same surface or in perpendicular surfaces. This notion of emptiness is related to the immateriality of the third material, or perceived as a setback in the plan.

This view is materialized both outside and inside the building:

Inside, the ceiling is separated from the walls by a small vacuum that simultaneously empowers the two plans; the same happens when the wall surfaces meet the floor, where stainless steel footer suspends the wall and terminate both, the surfaces and materials. The same also applies to other details when we separate the lacquered frames of doors and windows of the walls in plasterboard by a micro recess, or in the toilets where a white marble footer aligns with recessed footer in stainless steel in offices, or in the connection between the polished white marble and the yellow granite in a ground floor bathroom.

The design of the window frames was guided by the desire to make feel those working inside the office that they are not framed. Thus, in the interior, the frames are not visible and apparently there is no separation between indoors and outdoors.

Since the beginning the project had a strong concern to integrate environmental sustainability. The building is completely insulated from the outside, since the ground floor to the roof with a system of boards of high density polyurethane over which was applied an innovative technique using a sealant painting resistant to wear caused by abrasion UV's, winds and sands. This option allowed to perform the roof with the same material. This painting as well as being resistant to UV's has a stable chemical structure so that the roof will not need to be re-painted. The facade is practically auto-cleaned by the water of the rain.

By applying these durable materials in the facade, since the stainless steel window frames, granite and resistant paint in the facade, wood, marble and granite in the interior, the building is expected to have a slow, dignified and sustainable aging. 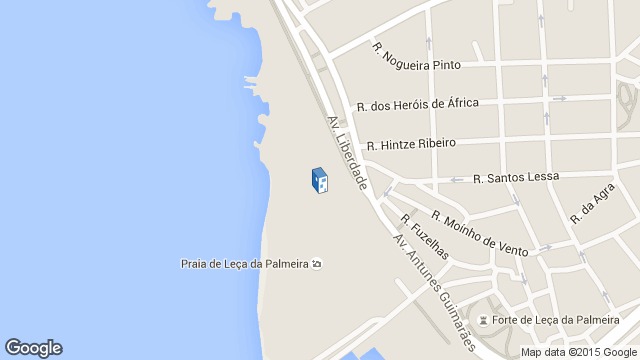 Location to be used only as a reference. It could indicate city/country but not exact address.
Share
Or
Copy
About this office
ADA - Atelier de Arquitectura
Office
•••