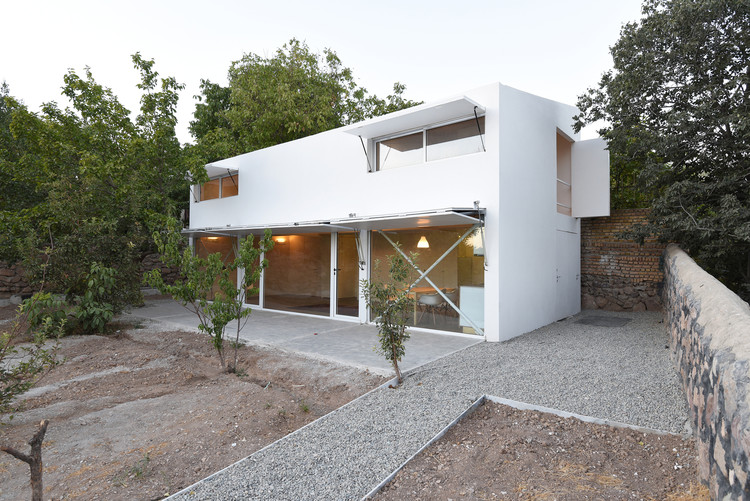 Text description provided by the architects. Fashand villa has been designed and constructed in a garden of 1200 m². The construction started in fall 2014 and finished in spring 2016. The construction site has oblong proportions and the northern side was chosen to locate the building which extends almost the entire width of the site preserving two old trees. A 5X11 meters rectangle was considered as building dimensions. Big glazing’s on the ground floor run the full length of the house to create picturesque planted view, bringing the outdoors in.

Due to security issues concerning buildings in the suburbs, which are used during weekends or holidays, it is almost inevitable to use fences. There so fences became an important aspect of design from the start. They are designed in a way that opening them provides shade to the floor to ceiling windows on the ground floor. Adding Flexibility and versatility to the simple building box, which could be both open to the garden or completely closed and windowless appearing to be impenetrable.

No differentiation is made between roof and wall, this gives the building, which is only 5 meters wide, a certain visual massiveness that forms a surprising contrast to the construction: exposed light steel structure and dry wall. The ground floor ceiling is 42 mm wooden slabs forming the first floor at the same time. This lightness, on the other hand, goes well with the technical feel conveyed by the fences folding horizontally against gravity.

The open interior on the ground floor is formed thanks to a linear utility band on one side that accommodates one lavatory and mechanical room with access from outside, one bathroom, storage and a straight single-flight stairs, leaving a flexible space for the kitchen and living room which can partly be transformed to a bedroom by a partition. A void in the middle visually connects the ground floor to the upper floor which is consisted of two bedrooms one bathroom and a balcony in a symmetrical plan. 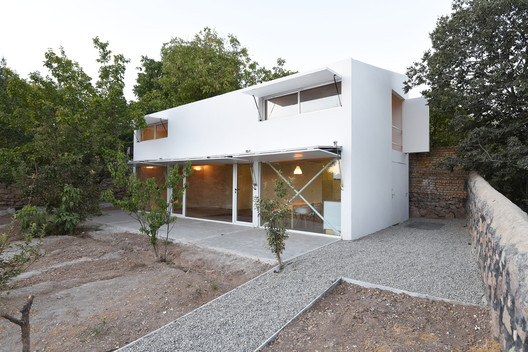