Blank Space, the online platform has announced the winners of its annual ‘Fairy Tales’ competition. The seventh edition of the contest selected top entries that offer tales of warning and hope during uncertain times.

Inspired by current events and exploring the creative process, the annual Fairy Tales challenge has attracted submissions from over 65 countries. With wonderfully crafted short stories and artwork, the winners were chosen by a jury of more than 20 leading architects, designers, and storytellers, including Alison Brooks, Marc Tsurumaki, Dwayne Oyler, Jenny Wu, Gail Carson Levine, and Arthur Mamou-Mani, among many other distinguished judges.

As our actual lives have become increasingly surreal. These stories' engagement of both the inherent darkness and optimism of the Fairy Tale became particularly resonant. -- Marc Tsurumaki, Principal at LTL Architects, Jury Member.

This year’s jury selected three prize winners and 11 honorable mentions. Read on for the full list of honorees. For more information, you can check Blank Space’s website.

1st Prize Winner: “The Year Without a Winter”

“We wrote our story thinking about the moment when the world has to stop and people have to change their habits to avoid the collapse and to protect themselves from an unfamiliar event, like a very strong and sudden climate change. We now realise how our story can look like the situation the world is experiencing today: waiting, boredom, loneliness, regrets, social media as the only way out. But what we really wanted to highlight is how emergency situations can lead to a real turning point. Difficult situations lead people to think more and use their creativity differently. Since this pandemic started we have been talking about a life-changing event, which is exactly the subject of our story. Our lives will change, but for the better..”

“Our fairytale is a naive attempt to address the issue of different kinds of crises we are experiencing - not only ecological, but social and existential as well. In the routine of everyday life, based on capitalism, we tend to lose ourselves to our jobs, our forests to fields and commerce. We forget our capabilities, such as senses, of our natural organisms, and many other things. We were mostly inspired by The Swamp School, a Lithuanian pavilion at the 16th Venice Architecture Biennale, where we volunteered, its creators Nomeda and Gediminas Urbonai, and after that living in an urban environment of Brussels stimulated our thoughts, collected in Venice.”

““Lloronas of Juarez” is a narrative of the ongoing violence against migrants, specifically women and children, that is enacted through national borders by settler-colonial states. Through an intersectional analysis, we leverage protest art, historical narrative, and landscape urbanism to re-imagine what the ecologies around the Mexico/U.S. border can become if we move toward more relational ways of connecting to the land. Specifically, our project critiques racist immigration policies, gendered ideologies, and xenophobic logics that converge in the design and construction of borders and prisons. We call attention to the urgency of abolishing detention centers that imprison migrant communities throughout the United States through a story of struggle and resistance portrayed by the protagonists of the story. We hope to dream in solidarity with migrants, immigrant rights activists, critical scholars, artists, designers, as well as other community organizers, who continue to resist empire-building toward the development of a future without borders..”

“H.A.N.D, I DO” - Diego Grisaleña Albéniz and James Mitchell

“Back to Eden”- Amit Avni 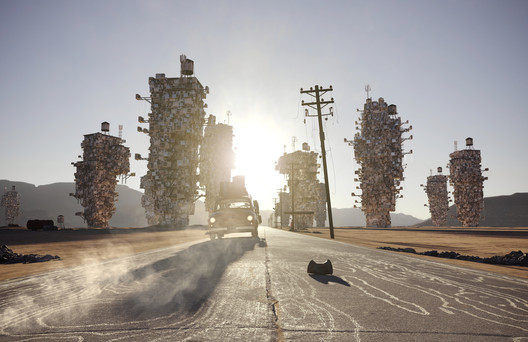