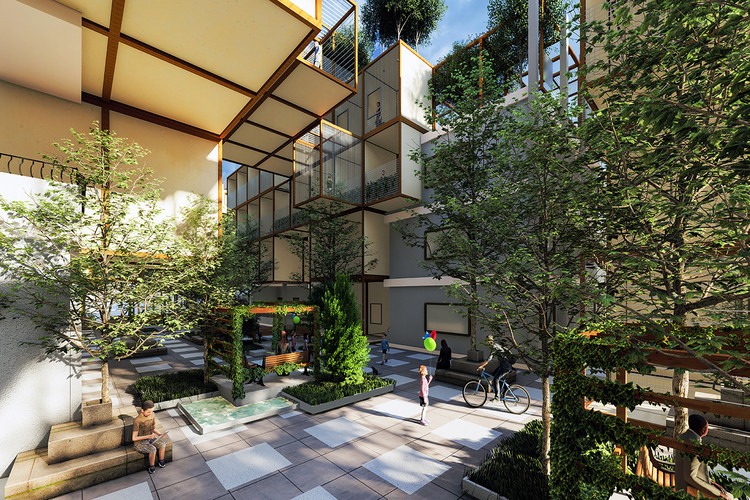 “Working to pioneer a new methodology to regenerate the future of post-war smart city”, Reparametrize Studio gathers data that help policymakers to generate cost-effective and sustainable plans that don’t rely on complete demolition.

Entitled “Zamalka into The Future”, the project investigates the town of Zamalka, part of the urban extension of the capital, in the Damascus countryside, almost completely destroyed during the war. Focusing on innovation, environmental qualities, and integration, the proposal includes the “renovation of six existing buildings and intervention of two destroyed buildings as well as the development of public spaces and infrastructure”. Recommending a co-living development, the scheme also includes public green areas, a vegetable garden, a green roof, and relaxation spaces.

The imagined ECO system for the new post-war city consists of frame box units, a “temporary, adaptive building structures that have the tendency to grow with time”. Including an electric turbine generator, each unit is self-sufficient. Connected with the neighborhood, the rooftops are linked with a series of intertwined plaza spaces, spreading resources and amenities. Throughout the development, different levels of privacy are generated, and green spaces are a prominent feature. Imagined as an affordable living space for the people of Zamalka, the project can create a new identity for the town.

We are aiming in this design for a more sustainable, inclusive, and beautiful city for further and addresses urban regeneration by focusing on public spaces throughout the city. The project involved an in-depth study and analysis of Zamalka city and the existing site to establish goals for integrating the design within its context before proposing a multi-layered co-living development. --Reparametrize Studio. 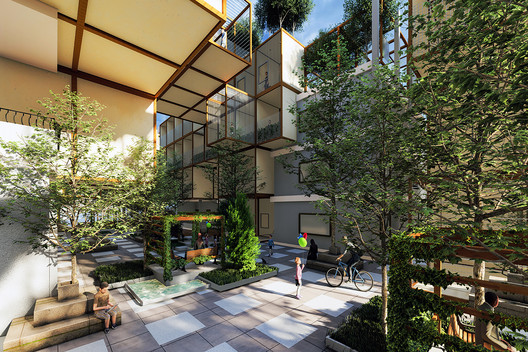