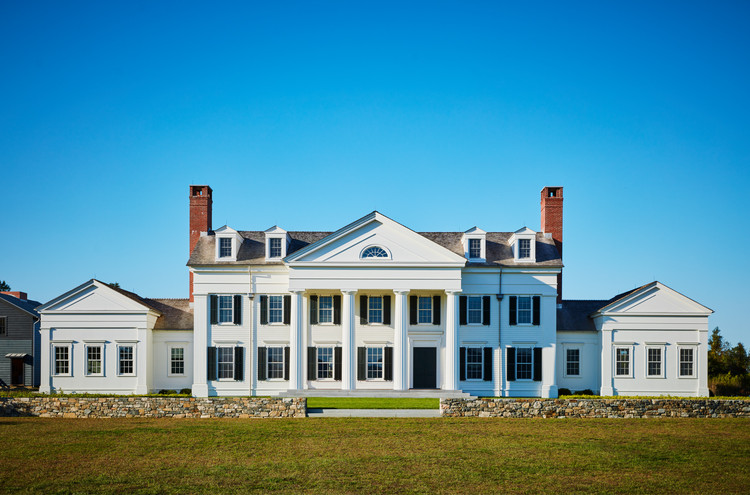 Text description provided by the architects. Completed fall 2019 in Sharon, CT, the home was commissioned by a family who first employed the firm to design two ancillary structures on the property, which ultimately inspired the final home and focal point of the property. Led by principal and cofounder Rafe Churchill, the architectural design maintains an accurate respect for an adherence to Greek Revival tradition.

While presented formally, the home ultimately remains understated in its detailing and composition with three predominant tenets: to take full advantage of the unique and pastoral setting of the site, embrace the historical location and architectural context of the main house, and create a home for a young family conducive to contemporary living.

As Asher Benjamin was a major proponent of the Greek Revival style in early America, the order and proportions of the home were derived from his 1830 treatise, The Practical House Carpenter. Inspiration was also found in local precedents, as well as the work of Benjamin Henry Latrobe and William Strickland.

The home is located in the Oblong Valley, which runs from the foothills of the Berkshires for sixty miles along the Connecticut-New York border. Just two miles wide, the valley has maintained its character of gentle rolling hills, open pastures, and ancient woods since Colonial times. It was key to balance the stature of the house with the magnitude of the landscape in which it sits, while also keeping it appropriate to the area’s architectural vernacular. The client’s love of the surrounding historic houses of the Hudson Valley gave a shared momentum to our proposal of a modern-day American Greek Revival house. Their one stipulation: while the house should appear majestic in its bearing, it was to feel like a family home.

The grand front portico forms the central reference to the proportions of the rest of the building. Linked by two hyphens, the central colossal hall runs outward to two symmetrical first floor wings  to the east the dining room, formal living room, sunroom and screened porch; to the west the large open-planned kitchen, informal dining, living areas, mudroom, laundry, study, and bathroom. Behind the colossal lies a large family room overlooking a formal garden parterre and swimming pool.

The house’s west entrance features a scaled-down portico with Grecian Doric columns. While more fitting as the day- to-day entrance to the house, the mudroom, into which it leads, enjoys similarly scaled proportions. Lined with open shelving, beadboard, and coat hooks - and its proximity to the laundry, complete with dog washing station - the mudroom entry resonates with practical family life.

The kitchen with informal seating is open to a shared breakfast and sitting area. A large table in the living room and dining room overlaps function in a single space. While the interior millwork follows from the Greek Revival tradition, the combined use of rooms speaks to less formal and more contemporary living. 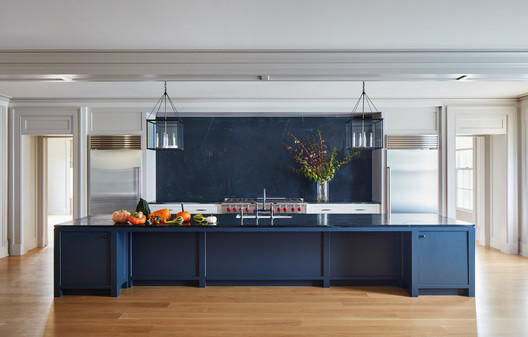