Text description provided by the architects. This terraced property in the foothills of the Gakuenmae district of Nara Prefecture faced several difficult conditions, including a retaining wall hemming the lot in on the north and south and a steep slope separating it from the road on the west side. Our design work began with an inquiry from the clients as to whether this property, which had gone unsold for a long period, couldn’t be used to build a house. Since the wife loves to cook and often spends the whole day in the kitchen, the clients requested that the kitchen form the core of the house. They also wanted the house to have an outdoorsy atmosphere and parking for one car.

Creating a parking space posed a problem due to the elevation gap between the property and the road. At first, we considered widening the area adjacent to the road to create a parking space and building a concrete retaining wall around the remaining, elevated portion of the property. However, the high cost of building such a wall prompted us to instead construct a gradual slope leading to the back of the property and gently grade the adjacent land. This created a large, gentle slope on the property, which inspired the image of a house formed by a large roof that continued the angle of the topography. A triangular pyramid bounded by the retaining wall on the north and the large roof became the living space.

Under the eaves where the roof is low, we located a doma entryway and living room (concrete-floored areas where shoes may be worn). In the center of the building, where the sloped ceiling is higher, we located the kitchen, with a dining room and second living room on either side. On the north (peak) side, the master bedroom and bathroom are on the first floor and the children’s room is on the second floor. Between the house and the retaining wall we added a deck as well as a private garden and area for doing DIY projects.

Because the open living-dining-kitchen area is surrounded by the bathroom-and-bedroom block as well as the toilet block, it is private but still receives light from four directions, creating a sense of connection with the outside environment. The wood frame that juts out from under the eaves shields the interior from view from the road. By creating a diverse collection of spaces, from the quiet doma living room on the slightly lower southwest side of the building to the breezy dining room connected to the deck and the bright living room filled with southern sunlight, we succeeded in designing a home where residents can seek out the space that suits them best as the season and time of day changes, each enjoying the home in their own way. 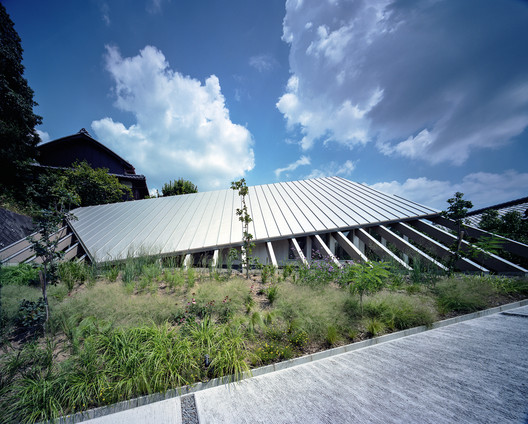