Founded by Norwegian architect, Andreas Tjeldflaat, Framlab seeks to advance social and environmental resilience through design. The studio states that “by combining the flexibility of modularity with the efficiency of aeroponic growth systems, the project offers self-regulating, vertical farming structures that can provide neighborhoods with affordable, local produce year around”.

Agriculture the basis for civilization is an extremely water-intensive industry, that demands significant land area, and contributes to deforestation and loss of biodiversity. “With the world population expected to reach new highs, agriculture, as we know it today, will need to almost double in size to serve this population”. In order to bring forward design-based solutions, Framlab developed Glasir, “a majestic tree described in Norse mythology as the most beautiful among gods and men”. Founding their design on the genetic blueprint of a tree, the studio generated an adaptable model “characterized by a monopodial trunk with rhythmic growth, developing tiers of branches — themselves morphologically identical with the trunk”.

With numerous studies and publications confirming that plants are modular organisms that grow through repetition of discrete structural units, Glasir consists of ten modules: five growth modules, three production modules, and two access modules. Through standardized interfaces, “all modules can connect to each other, enabling the system to assemble into an endless number of configurations, enabling high-yield, local production of greens and vegetables, while engaging with the streetscape as a distinct new urban figure”.

The 2x2 structure that can be erected anywhere in the city, relies on aeroponic growth which is the action of growing plants and vegetables in mist environments, rather than soil. Water-efficient and highly flexible, the system also allows plant roots to absorb much higher levels of minerals and vitamins. Moreover, Artificial intelligence and a series of environmental sensors will help the tree to optimize its growth.

Finally, the Glasir proposal offers affordable, locally-grown products, in food-insecure neighborhoods. Through their street presence, the tree-structures also serve the important role of creating visibility and awareness around the importance of greens and vegetables. 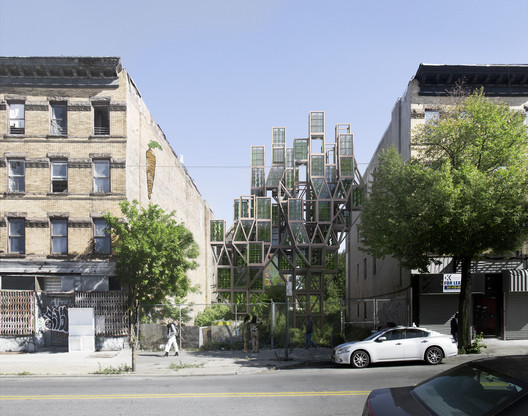