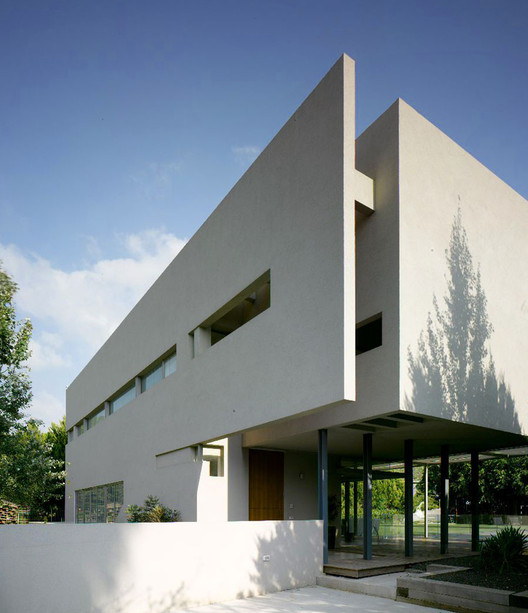 Text description provided by the architects. The Aharoni House contains a section that embraces a fascinating opening point to the exploration of an architectural event.The house is situated on a half an acre lot in an old part of Moshav Never Yarak, located in the Sharon-the Central region of Israel.

The lot is framed on three sides by an impressive, 50 year old, vegetation. The fourth side is defined by the predominant part of the house itself. The house conducts a dialogue with its surroundings through a series of sections that evolve along a walk relative to the length of the building.

The structure is essentially modern. It assimilates an experiment interpreting an architectural event by means of sections that develop contrasts between a low, wide horizontal space and a tall, narrow vertical staircase, lit dramatically by high positioned windows.

The swimming pool, perceived as a horizontal plane, integrates perpendicularly to the rectangular volume of the house, framing a ceremonial entrance. The mirror-like surface and strong rectangular structure create an experience accompanied by natural light from above.

The architectural scene creates two parallel and complementary ways for the resident to experience his place in the world: the entirety, in which the building is situated and which closes the greenery enveloped space, versus the continuity of discoveries and surprises the user encounters during his progress through the house. These individual events are partly repetitive, derived from the rituals that create a home atmosphere, are partly unique, and dependent on time and place.Thus, the architectural structure becomes a home; a place that give a sense of belonging, identity and meaning.