Text description provided by the architects. The new Pierre Veilletet Library is part of an urban landscape redevelopment programme for the Stéhélin neighbourhood of the Bordeaux Caudéran area. The project aims to ‘redefine the boundaries between sports, recreational activities and town through a number of interconnected programmes designed to transform the Stéhelin neighbourhood into a major hub for the people of Caudéran’.

The neighbourhood’s development will be further bolstered by the introduction of the high level BHNS bus service from Saint Jean railway station to Saint-Aubin de Médoc, including a stop on the Avenue du Maréchal-de-Lattre-de-Tassigny at Place Eugène Gauthier where the new library is situated.

The library stands at the intersection between the aforementioned square to the north and public gardens to the south, thereby functioning as a transversal entity, effortlessly linking two of the neighbourhood’s busiest public spaces, frequently buzzing with local school children.

The building comprises a simple ground floor, level with the public square and gardens, and a partial basement to house technical facilities. It has been designed in the spirit of a ‘square pavilion’, some 40 metres by 40 metres in size, and its roof functions as a true fifth façade, transforming the building into an eloquent urban landmark on a par with the site’s scale.

The layout is both simple and fluid, in accordance with the desire for transparency between square and gardens. It comprises two lateral sections housing closed spaces (offices, meeting rooms, services, etc.) and a totally unimpeded central volume accommodating the reception desk and reading areas.  The activity room, a concrete volume positioned half inside and half outside the building, is accessible from the main entrance and may operate independently if the main library is closed.

There are two entrances for the general public – the first, leading from the square, is situated beneath a porch way set back into the building while the second, leading from the gardens, is positioned beneath a large awning. These two façades are generously glazed, thereby conserving the original vistas – from the square you can still see the gardens and from the gardens you can still see the square through the building. The side façades, on Rue Domion to the west and overlooking the local swimming pool to the east, accommodate the service entrances, technical access points and feature large windows from the interior office spaces.

The project design is inspired by its overall square shape, subdivided into smaller squares (5.7 m x 5.7 m). This framework defines both the library’s structure and spatial organisation; each space is a multiple of this basic unit. The system, composed of load-bearing concrete elements for the lateral zones and wooden posts and beams for the central area, is topped with a ‘pyramidal sawtooth roof’, also constructed in wood. One face of each ‘tooth’ is fully glazed, thereby enabling natural light to bathe the very heart of the building.  As the windows are positioned according to a variety of orientations, the light entering the building is at once soft and subtly shifting. Two patios, one at the centre of the building and the other positioned close to the entrance, offer further opportunities for natural light to flood in and they function as additional outdoor spaces.

The library’s external image deliberately contrasts with the brightness and warm materials of the interior. The exterior façades are clad in dark grey metal boarding and the pyramidal sawtooth roof is covered in a waterproof membrane. Around the periphery, the roofing areas with no sawtooth design are entirely covered with vegetation and, to the south, photovoltaic panels provide the library with some of its electricity. 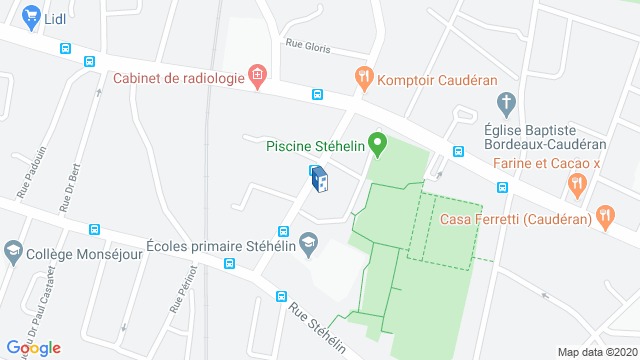 Location to be used only as a reference. It could indicate city/country but not exact address.
Share
Or
Copy
About this office
atelier d'architecture King Kong
Office
••• 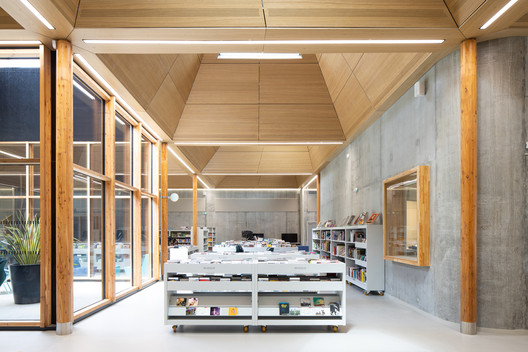