Text description provided by the architects. The Sauerland-Museum, located in the historically listed „Landsberger Hof“, has been expanded to become Museum and Cultural Forum South Westphalia. To achieve this, the existing historical building from 1605 was extensively renovated in a first construction phase and the permanent exhibition was redesigned. Phase two comprised an extension building, located on the directly adjacent, 45-degree sloped lot which leads down to Ruhrstrasse and the Ruhr River. This new sculptural construction, whose ground floor lies nearly 20 meters below the entrance level of the prestigious existing building, now enables the museum to house top-level temporary exhibitions of interregional stature.

At the client’s request, the award-winning competition project of the year 2012, with its underground connection between the existing and new construction, had to be completely redesigned. The new design of the museum building is stepped like a grandstand from North to South in three stages: From the level of the first basement of the existing building down to the Ruhrstrasse, where the main building mass with the great exhibition hall is located. On the way down through the white stairwell to the Ruhrstrasse the volume increases itself storey-wise, from the upper level with the start of the exhibition to the mezzanine level multi purpose hall down to the grand exhibition hall.

The existing building connects to the extension by means of a bridge-like docking structure from the first basement of “Landsberger Hof”, accentuating this passage with three diagonally cut window openings towards Brückenplatz. The path leads straight to a full height, panoramic window, which opens up - from a height of 15 meters - an impressive view of the city. The “English Promenade”, an existing historical footpath on the hill below Landsberger Hof, was preserved and now passes under the connecting bridge of the two building structures to a public panoramic terrace on the lower roof of the museum.

The striking, staggered new building also serves as a mediating component of the city between “Old Market” in the West and the significantly lower Ruhrstrasse in the East. By adopting the two main angles of Landsberger Hof and Ruhrstrasse, the new construction blends in naturally in its built environment. At the same time, Landsberger Hof as a historically important palace on the city wall remains dominant in the silhouette of the old town of Arnsberg. The homogeniously clad façade with travertine from Gauingen in Southern Germany emphasizes the sculpturality of the new museum. Carefully incised, three dimensional window openings create an exciting relationship from the interior to the exterior space. 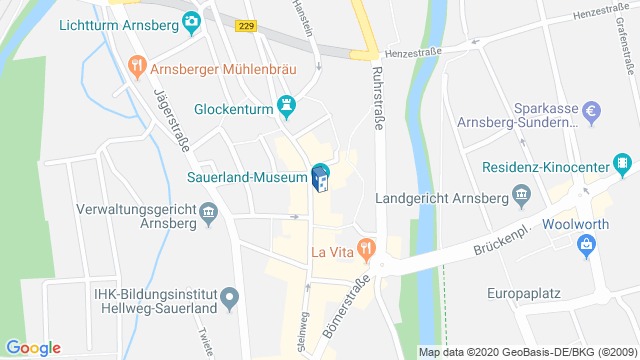 Location to be used only as a reference. It could indicate city/country but not exact address.
Share
Or
Copy
About this office
Bez+Kock Architekten
Office
••• 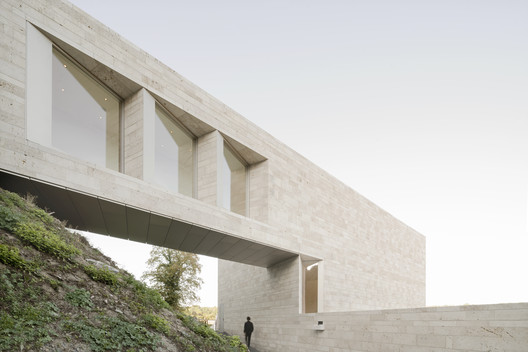