All
Projects
Products
Events
Competitions
Save
IAAM, the International African American Museum Is Now Under Construction
Share
Or
Copy

After 20 years in the planning, the International African American Museum is now under construction in Charleston, United States. Designed by Pei Cobb Freed & Partners, IAAM aims to honor the site where enslaved Africans passed away, by sharing narratives, previously overlooked by historians.

Located on the plot of the former Gadsden’s Wharf on the Cooper River, overlooking Charleston Harbor, the waterfront was “the port of arrival for nearly half of all enslaved Africans brought to North America”. IAAM, designed by New York-based architectural firm Pei Cobb Freed & Partners, dedicated to telling these overseen and forgotten stories, was first proposed in 2000. Finally, under construction, the building will also celebrate the contributions of the victims’ descendants.

As the place where thousands of Africans from diverse cultures first set foot in North America, Gadsden’s Wharf is not just the right place to tell this story; it is hallowed ground, […] the special design challenge of the museum was to build on this site without occupying it. -- Henry N. Cobb, lead designer for the project

Inspired by its strong context and the charged historical site, the proposed architecture will generate a “426-foot-long, 84-foot-wide single-story volume hovering thirteen feet above the ground and supported on eighteen cylindrical pillars arranged in two rows”. The museum’s façade will have a pale-yellow brick envelope, while the glazed end walls will be framed by African Sapele louvers. Moreover, the supporting columns will be clad in traditional oyster-shell tabby.

Orienting the vision towards the Atlantic on the east and downtown Charleston on the west, the structure puts in place an open floor plan. A central Atrium of circulation will represent the “heart of the site’s collective memory”. The museum, home to historical and cultural exhibits, will also include a family history center for ancestral research and a social justice action lab. Scheduled for late 2021, the project comprises the African Ancestors Memorial Garden, designed by landscape architect Walter Hood. 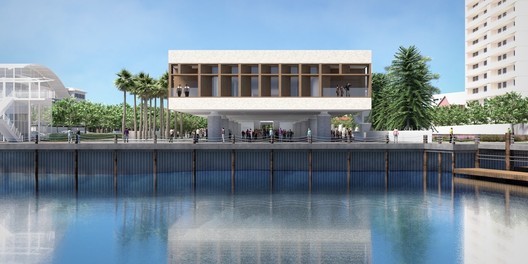