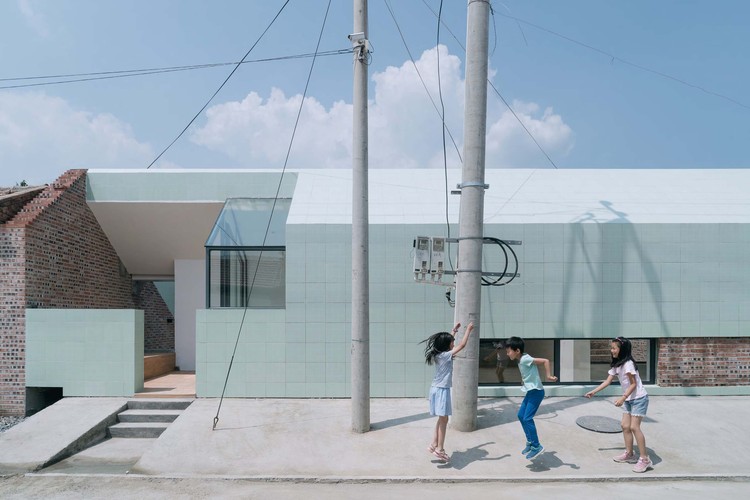 Background
Houheilongmiao Village is located at the bottom of Haiying Mountain in Yanqing, Beijing, with green sorghum fields in summer and frozen water-filled woods in winter. It is full of the tranquility, soothing and bleak which are unique to the northern countryside. Here are cicadas, fog, red brick houses and the blue sky in late autumn. Abandoning the poetic imagination of classical painting, it is like a daily scene that is full of tension in contemporary realist oil painting.

"The end of history is the beginning of memory" (Aldo Rossi). This house built in the 1980s was originally used as a wedding room. Even if it has been ruined, it still exudes the happiness of that time, and then accepts long bits of wear and tear of years. The last part of the life history of the northern countryside ended with the urbanization process accompanied by new technology media. Young people entered the county or urban areas for employment, and their houses became vacant. As a result, the village update restarted as a guest house, waiting to be deconstructed.

The three-story brick house and its front yard form a 183-square-meter site. The flat-tile roof, red brick dry wall surface, and light green window frame are a kind of gift from the base. The potential richness needs special interpretation: "Even after the garden disappears for a long time, the planted plants will bear fruit. (Sebastien Marot). "

Story
Today, more than 30 years later, here will usher in a new "family"-friends or new people; time travels, meets with nostalgia; the family "temperature" is always the same. How do they meet each other in different era of year?

Let the new life replace the old emotion, tear down and rebuild? Or worship history and keep it as it was? We feel that the dual relationship between the old and the new should be merged into a "communisme formel"-giving a new meaning to an object is already a production. (Nicolas Bourriaud)

Mutual reciprocity in the ‘Reciprocal House’ is reflected in three levels:
The first is the interaction of the new and old houses. The village's traditional sloping roof form and intimate dimensions have become invisible memories, which continue in the design. The intersecting positions of the two north and south rooms form a “mutual” occlusal space. In order to enlarge the original experiencing interior space experience, the new house on the south side was dug down, and people entered the north room through the rising stairs, which seemed redundant. The "design action" makes the space come alive as the height changes, and the cave-like living experience is born.

Regarding the expression of "interaction" of materials, we hope to continue the memory of the red brick and green window. Tiles, a common building material in the North China countryside, expressing the villagers ’simple needs for cleanliness. We don’t want to deliberately expose the real building materials in order to ‘construct’ the desire, nor do we want to sing the populous big white tiles like populist, The ceramic tile was selected as the skin of the south house, and the tile green and brick red formed a "vulgar" contrasting color, but filled with the fiery texture of life.

The third level of "interaction" is a closed streamline hidden in the interior, and the "circular" path also seems to be a metaphor for "garden". It starts from the entrance courtyard, and then sees the modern south house. Then it enters the nostalgic north house through the "valley", climbs to the terrace through the small hole, and then enters the courtyard and bedroom from the large step accomplishing the "Mountain House Wandering". This sense of movement that accompanies "modernity" is not new, and Adolf Loos 's "Raumplan" house gave the answer 100 years ago.. Today, children who run happily indoors and kittens who visit from time to time still seem to be full of excitement.

Nature
In Beijing, the rain makes people love and hate it. The heavy rains of June and the dry winter cycle start and end. Falling from the sky, trickling down to the soil, this kind of rainwater cycle becomes considerable in "interchange". It starts from the convergence of the roof, winding from the central terrace to the courtyard through the "ditch", and then leading to the open channel of the road along the gravel path. These processes are seen and heard from the garden and indoor occupants, and form a vivid landscape in the rain experience. In the dry season, gravel paving brings the imagination of " Karesansui".

We try to shape "Intertwine House" into a container of sunlight, the huge skylight and the opening combined with the posture of sitting and walking, bring about the bifurcation of the garden path-like perspective, traces of light and shadow under the "flow" of sunlight on the side wall, and "everyday life" of the village street becomes the "view frame" of the dining table.

Italo Calvino said, "You ran so far, just to get rid of the burden of nostalgia!" When homestays and travel become a life form of a rich society in China, we hope that visitor will not only see the memory puzzles of the North China countryside, but also easily Look at tomorrow, the old and the new are borrowing each other. 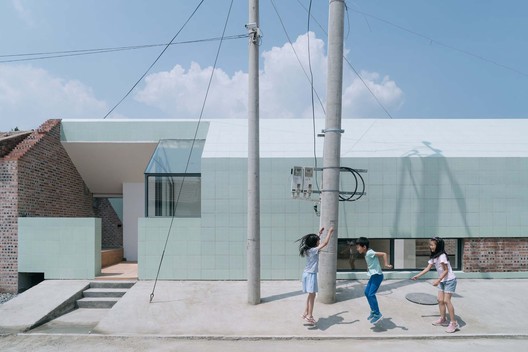