In this episode, host Aaron Prinz speaks with Gene Kohn, Founder and Chairman of Kohn Pedersen Fox Associates. Gene founded KPF in 1976 along with William Pedersen and Sheldon Fox. He served as the original President of KPF, developing its global strategy, shaping it into a world leader in all aspects of architectural practice, and leading it to become the youngest firm recognized with the AIA’s Architecture Firm Award. Kohn also published a memoir “The World by Design: The Story of a Global Architecture Firm” that can be purchased on Amazon.

Hudson Yards has generated a lot of attention over the past year, and KPF was selected to design the master plan as well as a few of the towers within the complex. Can you take us through the development process of such a large addition to New York City? (3:10)

“In terms of timing when Hudson Yards happened, it’s a great story. Steve Ross is someone that we’ve known for a number of years. I met him 20 years ago in Los Angeles, and we got selected as a result of getting to know him. We got selected for an interview for the University of Michigan Business School which is called the Ross School of Business. I think Steve donated well over $200 million, over the course of the project, to the building and selected us, with the jury, to design it. It was a great experience and a fantastic success. I think that gave him confidence that we were good designers, and could do an excellent job. I stayed in touch with Steve. One of the things that I’ve always believed in is developing relationships with clients that aren’t just about business, but seeing people socially, or having lunch, or just stopping by just to stay in touch. I did that with Steve. So, when the competition for Hudson Yards came about, twelve years or thirteen years ago, he called me and asked if we would be on his team to compete. There were six developers in the final competition, all with very good architects, but we were with Steve Ross. One of the aspects of the competition was that you had to have a tenant, in other words you couldn’t just design. The city was anxious to make this happen. If you had a major tenant lined up and you were selected then you could get this project underway immediately. At the time we had Fox News. Murdoch was very interested in the project and actually pushing us to do a major tower that would be all of Fox’s different companies. It was a beautiful scheme actually, and we had a great chance to win because we had the tenant, we had the scheme, and Steve had the money. Unfortunately, one week before the competition was due, Murdoch withdrew which eliminated us from the competition. Tishman Speyer was eventually chosen for the project. They had a difficult time coming to grips with having to put up all of the money initially which was a billion dollars for each site… The site to the west, on twelfth avenue, that particular site had been selected by the city and zoned by the city for the Olympics in 2012, and after the Olympics, it would become the stadium for the New York Jets football team… We actually designed the stadium, but they never rezoned it when we lost the Olympics and didn’t build the stadium. Tishman Speyer said that they would put the money up when the you (the city) rezoned it so it can be used for commercial. Unfortunately, the city said no. If you win the competition then you can get it rezoned, as we had to do. The relationship fell apart and the site was available again. Steve Ross, I believe, was in China, and got a call from the city saying that he had one day, twenty-four hours, to make a decision if he wanted to do the project or not. Remember this is 2007/2008, a terrible economy, a big crash, no tenant, no money, and two billion dollars to develop somewhere around seventeen million square feet of building. Most people would have said ‘This is crazy, that’s a big big risk.’ Steve took the risk, and we were selected to redo the masterplan…”

What were some of the challenges that you faced when developing Hudson Yards? (7:05)

“It’s probably one of the toughest sites which a lot of people don’t appreciate today because they just see all these tall buildings and public space. They forget below is a very active railroad. That entire site is covered with tracks, so there is continual movement of trains. We couldn’t put any more than two tracks out of commission at any one time, see we had to place for all new building, where the columns would go. Building over it was extremely difficult. We eventually had to use major trusses to support the platform above, and the columns had to come down onto the truss. They couldn’t go down to grade. Below that site is also the tunnel, and all those trains go to New Jersey, then Washington, and further south to Florida. We had to know where everything could go, so even though you placed buildings, you had to know where to place them because you still needed the structure to go down to rock which in many cases is over one hundred feet below. I’d say it is one of the most complex pieces of land that you could work on. So, a lot of developers didn’t appreciate the cost and complexity but Steve’s team did. I must say that the client assembled an amazing team of people on their own side plus great engineers. We worked with a super group of people…”

You studied at Penn in grad school and had the privilege to study under Louis Kahn. Can you explain to us what that experience was like? (18:03)

“Well Kahn to me was so exciting. I mean, Louis Kahn could speak for four hours, and if you had to go to the bathroom you didn’t. You didn’t move because you had to listen to every word he said, and it was so inspiring. He would take us on tours of his buildings and he would explain to the brick layers what it meant to be a brick. It was exciting. He really made me value design, what it creates, and I loved his buildings. I became friendly with his family, his wife at the time and his daughter Sue Anne, and eventually his son. He had another child but I didn’t know. Louis also had funny hours. My critiques, where he would personally review my work, was at his office in downtown Philadelphia on Walnut street at 1:30 in the morning. I kid you not. The street was empty in downtown Philadelphia at 1:30. Nobody was there. I’d go up to the fifth floor and there is Louis at his desk with the light on while the rest of the office was dark. He would review and start to sketch your work. He always put shadow on all of the structure in plan, so it was kind of interesting. He made you understand where the vertical elements were and their impact on horizontal surfaces. It was a phenomenal hour, so by three in the morning I could leave and head back home to get some sleep. It was an exciting moment. I couldn’t sleep because I was so worked up. Louis Kahn was that type of person. He inspired you, he excited you, and when he spoke you were hypnotized…”

KPF is now a global design firm, doing large scale buildings all over the world. How did KPF get its start? (20:36)

“I came to New York and I worked for a number of firms including John Carl Warnecke, where I became partner and then president for nine years. I was his only partner, and I said ‘John we need other partners. You can’t have four offices with just one partner trying to do all the work.’ He didn’t want to surrender any more of the firm so I decided to leave and I formed Kohn Associates. I asked Bill Pedersen who was working with me at Warnecke, I had hired him, to join me, and Shelley Fox who was my classmate at Penn. Now the reason I asked those two, Shelley was very conservative and was not a ‘Yes Man.’ If he didn’t agree with me then he would let me know. I didn’t want people to agree with me just because I said it was a good idea. If I was about to make a mistake, I wanted to know about it. Bill was less critical but bill was a great young designer. While I had been designing all my life, I saw in Bill the potential to be a phenomenally great architect. What I learned in the Navy about leadership was that if you’re a leader then you want to bring people together. The best people ought to be the ones that take the lead, so if somebody was better than me, then I’d rather have that person do it than me. I cared about the firm first. If you are the architect doing the work and you are very proud of what you’ve done, then you want to do it and you want the credit. It’s one thing to design a building and get it done. Second is, to create a firm. You have to decide if the firm is the most important thing, so creating the firm means that you’re going to have people do the work, otherwise it’s like creating a sports team and not using the best players to play, instead the coach plays. In this case, I thought Bill would be the better design partner, so I made him the lead designer, and Shelley took over management. I became the emotional creative leader, the one who could get work, and represented the firm on a broader scale. That’s how we started. Three of us equal partners, all working together…” 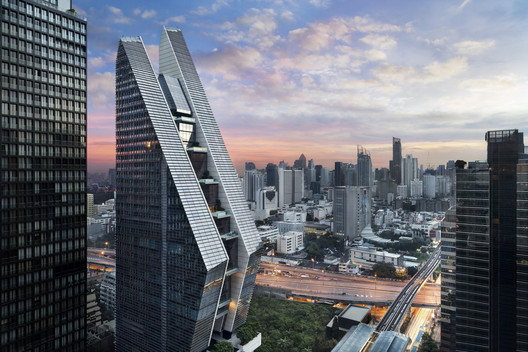