Text description provided by the architects. The Giacometti Institute was created on the initiative of the Giacometti Foundation, which owns the biggest collection of Alberto Giacometti’s works. The Institute is the reference place for Giacometti's work and an art history center, which includes exhibitions, research and pedagogy.

With a surface area of 350 m2, the Giacometti Institute is located at 5 Rue Victor Schœlcher in the 14th arrondissement, the Montparnasse neighbourhood where Giacometti lived and worked throughout his career.

It is housed within the former studio of artist and interior designer Paul Follot, in a listed heritage building, a private mansion in the art deco style, with decors have been preserved and restored. Dating from the period of stylistic transition between art nouveau and art deco, the building was built between 1912 and 1914. Paul Follot’s studio constitutes a remarkable testimony to the Montparnasse neighbourhood, the area chosen by artists.

For architect Pascal Grasso, the objectives were three-fold: respect the historic monument and give Giacometti’s work pride of place, while devising a contemporary space endowed with its own identity. “We chose a contextual approach that consisted of retaining traces of history and transforming the constraints imposed by the existing building into assets for contemporary creation.”

A surprising entrance
The architect took advantage of the different levels, allowing him to create unique perspectives and points of view and to organise a maze-like scenography pathway in which alternating ceiling heights and competing directional flows provide different experiences. On a permanent basis, Alberto Giacometti's reconstructed studio includes his furniture, personal objects, walls painted by the artist and exclusive works, some of which have never been exhibited before. The reconstructed studio is exhibited in a clear and spectacular way by arranging a series of steps and a extra-clear glass.  The architectural intervention goes to the essentials with a minimalist style.

Towards the historic heart of the building
The visitors access the exhibition rooms via a patio integrated within the scenography space thanks to a glass element created by the architect. For Pascal Grasso and Pierre-Antoine Gatier, the rule of thumb when intervening within protected spaces was to work on “conservation of the decors”, but not on an identical restoration of existing elements. The goal was to preserve the markers of time, the historic traces, and to add the elements required for the venue’s new vocation with contemporary flair. The renovation respects the principles of reversibility and limits the contemporary interventions, while maintaining a distance from the historic decors.

“Partitions, picture rails, pedestals, and lighting fixtures in white stand out against the historic decors and appear to float. The form of the suspended lights was inspired by the geometry of the historic ceilings that accommodate them, to make new, contemporary chandeliers that extend the historic stratification of the venue.” 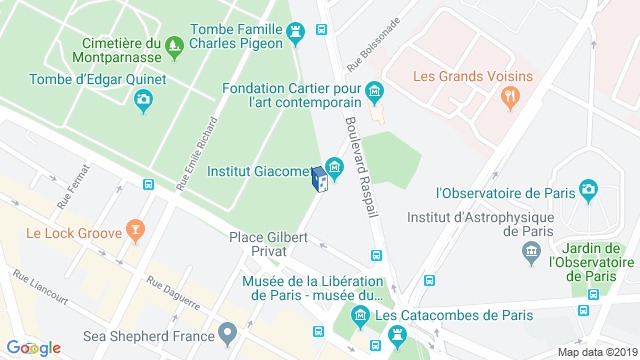 Location to be used only as a reference. It could indicate city/country but not exact address.
Share
Or
Copy
About this office
Pascal Grasso Architectures
Office
••• 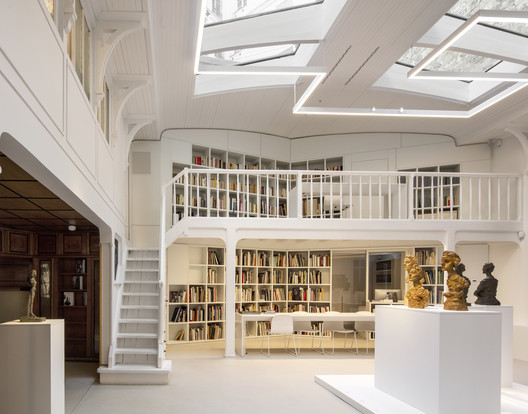