Save
We Need More Wheelchair Users to Become Architects

When famed architect Michael Graves contracted a mysterious virus in 2003, a new chapter in his life began. Paralyzed from the chest down, the pioneer of Postmodernism would be permanently required to use a wheelchair. Graves could have been forgiven for believing that having fought for his life, having been treated in eight hospitals and four rehab clinics, and needing permanent use of a wheelchair, that his most influential days as an architect were behind him. This was not the case. To the contrary, he would use this new circumstance to design trend-setting hospitals, rehab centers, and other typologies right up to his death in 2015, all with a new-found awareness of the everyday realities of those in wheelchairs, and what architects were, and were not doing, to aid their quality of life.

As described in a Washington Post article written by Barbara Sadick, Graves and his peers were always aware of how those in wheelchairs encountered more difficulty navigating the built environment. However, his illness gave him new, first-hand experience of this challenge. In the rooms that he occupied during his treatment, he observed that “the reliance on others that these designs necessitate creates a feeling of hopelessness.” He reflected that designers must understand the physical implications of being confined to a wheelchair, from issues of circulation down to detailed considerations of how to pick up a piece of paper. As Graves noted, “this became very real to me after my illness, so since then I’ve asked my design team to spend a week in a wheelchair.”

Graves’ story is a powerful example of the ongoing struggle within the profession to achieve the ideals of “universal design,” but also a strong argument for the need for more architects who have a first-hand understanding of the complexities of living with a wheelchair, or other challenges. In recent times, the profession has become more aware of the need for a diverse design community, with strong efforts to encourage female and ethnic minority participation in the traditionally white, male industry. However, in stark contrast to the detailed studies on participation, experiences, and success within the industry for these under-represented groups, neither the American Institute of Architects nor the Royal Institute of British Architects collects figures on the number of physically or cognitively disabled architects under their jurisdiction.

While it does not collect data on the number of wheelchair users in the profession, the AIA does point to their valuable contribution in publications such as “Celebrating Architects who Overcame Disabilities.” They tell the story of Ron Mace, FAIA, the designer pioneer, wheelchair user, and coiner of the phrase “universal design” whose work was instrumental in the passage of national legislation prohibiting discrimination against people with disabilities, such as the Fair Housing Amendments Act of 1988 and the Americans with Disabilities Act in 1990.

Also celebrated is Karen Braitmayer, FAIA, whose expertise in accessibility began from examining wheelchair obstacles in architectural offices during her search for post-education employment. In 2010, President Barack Obama appointed her to the United States Access Board in recognition of her work. She believes that the lack of diversely-abled people in the profession begins in the early education process, with educators and counselors not fully equipped to properly guide the diversely-able who seek to train as architects.

What can we conclude from the diversely-abled persons cited? As women and persons of color have become an integral part of architecture, there is no denying that their contributions have heightened our designs. Due to their unique histories and experiences, diversely-abled persons can only further enhance the betterment of society in designing healthy environments. Society needs to encourage those who positively contribute to the communities in which they live, regardless of where they came from, what they look like, or how they practice.
-American Institute of Architects, “Celebrating Architects Who Overcame Disabilities

Despite these first steps to celebrating and encouraging the participation of wheelchair users and those with physical disabilities into the profession, systemic reform is needed to address their continued invisibility and under-representation. Professor David Gissen, an architectural historian at the California College of the Arts and former wheelchair user, points out in an article for The Architect’s Newspaper that “the absence of disabled architecture students, architects, and particularly academic and institutional leaders relegates people with disabilities to being a topic of discussion versus agents of change.”

Gissen highlights the inaccessibility of architecture buildings in elite Ivy League school of architecture, construction sites (which are not covered by the ADA), and even many noted architectural precedents. Speaking to New York Magazine, he highlights the fact that sites such as the Acropolis in Athens originally featured a wide gentle ramp in ancient times to offer universal access, destroyed by the Roman Emporer Caligula. Moving forward to the 19th-century, poets, painters, and archaeologists equated the arduous labor of climbing the steps of such monuments with enlightenment and spiritual growth, an antipathy to the original ramp's purpose of "transforming the Acropolis from a feudal bastion to a religious and civic site … the elderly and very young children joined others on the upward pilgrimage — some walking, others on horseback or in carriages."

To improve the representation of wheelchair users in architecture, Gissen advocates for transformation to physical spaces in colleges, and a reform of legal structures to open access to the construction industry and sites of noted architectural importance. Across the Atlantic, such sentiments are also echoed by the Royal Institute of British Architects. A collaborative report between RIBA and the University of the West of England, titled “Disabled Architects: Unlocking the Potential for Practice,” offers a deep exploration of the challenges faced by those with disabilities seeking to become architects. Among their final recommendations are better outreach by RIBA in schools, a diverse profile of educators and lecturers, comprehensive accessibility in schools, and consideration for whether the admissions procedures and requirements for architecture schools unwittingly exclude people with disabilities who have the potential to be successful architects.

Increased representation in architectural spheres for those with disabilities would have a direct positive impact on the universal public experience of space. While legislation such as the 1990 Americans with Disabilities Act has done much to alert architects to the need to design spaces for all, the industry is still guilty of assuming the end-user to be healthy and able-bodied, along the profile of Le Corbusier’s Modulor Man. As noted in a previous article on redefining accessibility by Catherine Slessor, “despite an increased political and cultural awareness of disability, architecture still tends to have an uncomfortable and edgy relationship with disabled people. Most see the built environment as an unforgiving terrain to be navigated, while most architects regard “inclusive” design as, at best, a regulatory box to be ticked; at worst a mild irritant, stifling creativity.”

The architectural process is uniquely personal, influenced by our underlying perceptions of the needs of users and society as a whole. As long as disabled architects are a statistical invisibility, the profession will continue to struggle to change its relationship with accessibility, despite calls to redefine the Modulor Man in a new era of inclusivity, and despite anomalistic celebrations of wheelchair-using architects such as Graves, Mace, and Braitmayer. In reality, systemic changes to our educational institutions, outreach operations, and data point records will be needed to ensure that future urban environments are designed for the many, by the many, whether this be in terms of gender, race, religion, or physical and cognitive ability.

One only needs to consider Michael Grave’s post-illness work as evidence of the great achievements which can be accomplished by a design team rich in diversity. As we continue to consider accessibility as an output of the design process, directed at the end-user, we must also recognize the need to offer access to the industry to those with physical disabilities: a subgroup of the population who are disproportionally dependent on the skill and competence of design teams tasked with shaping their experience of the built environment.

This article uses information sourced from The Washington Post, New York Magazine, The Atlantic, The Architect’s Newspaper, The American Institute of Architects, the Royal Institute of British Architects, and The University of the West of England. 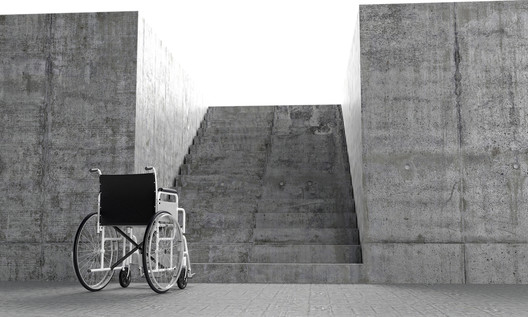