Greek design practice Petrās Architecture have created a new proposal for an archaeological museum in Sparta. Designed for the Peloponnese Municipality, the project integrates an existing listed building with a new museum building and the surroundings archaeological finds. The project aims to bring together architecture, history and landscape into a single narrative and museum experience for Sparta.

As the Petrās design team outlines, the listed building and the new building have been conceived as a distinct landmark. The proposal emphasizes the buildings’ simultaneous autonomy and interconnection both functionally and semantically. It was made to represent versions of austerity and rigor of two distinct yet connected historical moments of architectural design. The project proposes a unified exhibition path which interconnects the indoor exhibition narrative with the outdoor natural and historical landscape of Sparta along with the adjacent archaeological finds.

The exhibition design has been conceived as a "site of history and myth" which responds to the broader interweaving of Sparta’s values and its natural, historical and archaeological landscape. At its core, the 'grand narrative' takes the shape of a large curved partitioning curtain, which can change as needed, and along with its flowing sections, stands for the historical path and guides the visitor through the story line. The exhibition sub-sections articulate individual ambiance alongside diverse geometrical and lighting design.

The myth, as a fundamental backdrop of archaeological finds, flows parallel to the curved paths of history. The mixture of natural with artificial lighting, the certain design of cases and selection of materials convey each section’s main idea. The core idea of the use of the rhomboid canvas came up from the fact that the ancient road, connecting the acropolis with the Evrotas river, transforms the rectangular system of the listed building into a new rhomboid one. Furthermore, the canopy over the mosaics enhances the view towards the archaeological site, a view which is aligned to the one offered from within the museum space. From a material standpoint, the building’s stainless-steel façade reflects the colors of the surrounding landscape which transforms its volume. Both space and time inside and outside the building appear to be a continuum. 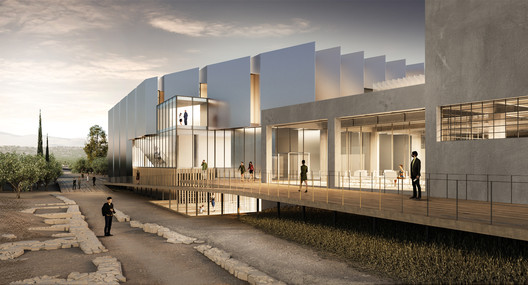