Text description provided by the architects. The house is located in the subdivision accessible from a suburban arterial road. It has been planned in the strip- shape lot; with narrow width and large depth. In the vicinity are the houses built by house-building companies or local builders. We then aimed to build a house that possesses dignified presence with both designability and coziness in such a cluttered townscape. The exterior is composed of volumes with carefully examined proportion, window layout, and materials. The window with height and the overhang porch emphasize vertical and horizontal lines, making the facade not too much uniform.

The entrances are positioned on both sides of the porch to enhance convenience for access from the parking spaces that are laid out on either side. This moderately blocks eyes from the road and secures privacy as well. The interior of the first floor is connected from the entrances through the washroom at the penetralia, along the deep and strip-shaped lot. The raised floor, staircase, and furniture are rhythmically laid out along the passage. They are used as flexible spaces for communication to enrich daily lives.

On the second floor is the space with a feel of openness, where eyes from outside are blocked on the one hand while those letting go from inside to outside on the other hand. Buildings come close in the periphery, but a ridgeline of the near mountain can be viewed to the road in the north. Making the best of this environment, a living room with high ceiling has been laid out toward the road, and a large opening provided to cut out the surrounding landscape.

The natural scenery and light that are taken inside the house make the internal appearance ever-changing, allowing eyes to go through and expand. In addition, the light that is reflected in the shiny wainscot makes the view in the front more beautiful. The building with impressive appearance generates cozy space inside. It is achieved by studying the potential and characteristics of the site and adding to the building the sense that is unique to architects. 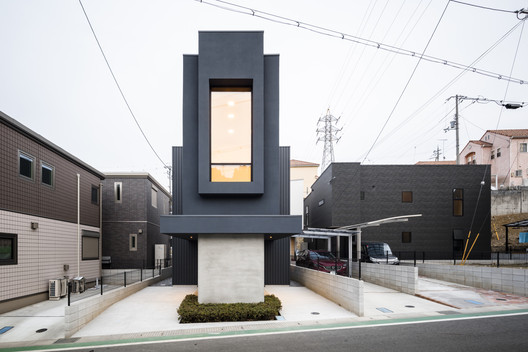