Save
15 Architecture Projects for Life in Space
Share
Or
Copy

Architecture for Living on the Moon

In collaboration with European Space Agency (ESA), in 2012 Foster + Partners presented a project titled "Lunar Habitation," a space residence developed through study and experimentation that could house up to four people. With their proposal, the architects behind the project explore the possibility of using 3D printing to construct housing at the Moon's south pole, where sunlight permanently shines.

Developed in collaboration with the European Space Agency (ESA) and the Massachusetts Institute of Technology (MIT), the Moon Village project was established as the first human settlement that, through emphasizing durability and self-sufficiency, could be the first permanent human settlement on the Moon. This multidisciplinary project, to be presented in 2019, will be planned, designed, and developed by SOM.

The Test Lab project is the winner of the "Moontopia" international design contest and stands out as self-sustaining lunar settlement, designed as a place for living, working, and research. Out of hundreds of entries, it was chosen by a jury of spacial architects, academics, and designers from NASA. The structure's design allows it to expand on completely on its own by using an auto-assembly method of 3D printing, enabling the gradual colonization of the Moon over time.

The Momentun Virium Project is distinguished by its interesting placement. Understanding that the Moon is a natural satellite and that its integrity should not be obstructed by human constructions, the architects behind the project proposed placing their structure in Moon's orbit instead of on its surface. An elevator would link this space-city with the lunar surface below, providing a sensible and elegant solution that combines poetry and science fiction.

With modular characteristics, Modulpia is a structure that could organically expand itself over time and supply its own food by using plants that would provide oxygen and dispose of CO2 while also providing drinking water through greywater purification -- embodying the concept of bio-regeneration. By using a structural system called Weair-Phelan, the project proposes to generate an expandable landscape that would allow us to inhabit the Moon using relatively economical, sustainable, and simple means.

Lunar Oasis defines itself as a "biophilic sanctuary" that aims to reconnect the Moon's inhabitants with Earth's nature by focusing on vegetation as a way to combat the Moon's sterile landscape, thus supporting us in one of the most hostile environments known to humans.

Dimensionally speaking, “The Aerosphere” is the smallest project out of all the proposals aiming to have us living on the Moon. It's based on a refuge that focuses on the possibility of "space tourism." With this idea in mind, Stephanie Stiers designed a transportable suit that acts as life support and satisfies all of the wearer's needs. This project focuses on a temporary and nomadic stay on the moon, allowing participants to explore the Moon using predetermined touristic routes.

Related reading: Life on the Moon, According to 8 Architects and Artists

Architecture for Life on Mars

Designed by a team of engineers, scientists, and designers from the Mohammed bin Rashid Space Center in association with BIG, this project, presented in 2017, aims to create a city that simulates living conditions on Mars. By doing so, they will research and test building strategies that will withstand the radiation and heat on Mars. The city, called Mars Science City, will be built using 3D printing that will use sand from the Emirati desert, creating an experimental living space that the team will inhabit for a year.

The Marsha prototype, from AI SpaceFactory, is the winning proposal from the "NASA Centennial Challenge." Built using 3D printing technology and incorporating robotically installed windows, the project experiments with different building materials like basalt fiber extracted from Martian rocks and bio-plastic. Marsha challenges the image of architecture in the Space era, focusing on highly livable spaces as they relate to us Earth-dwellers.

Presented in 2018, Mars Case is a minimalist living prototype for inhabiting Mars. Through this project, OPEN Architecture visualizes the ideal house, combining technological perfection with design and architecture. MARS Case integrates Xiaomi's individual electronic appliances into a synthesized product, optimizing the available space and resources. Through the re-circulation of heat, condensation, and other secondary products generated by every electronic device, the house recycles energy, water, and air through an integrated ecosystem, minimizes the consumption of resources.

German firm ZA Architects, through the Mars Colonization project proposes to build a massive underground network of tunnels to begin populating the red planet. Through technology and robotics, they would first carve out large caverns in the planet's basaltic rocks to later insure the oxygen and water supply through the production of an underground glacier in a basalt processing plant.

In 2015, after the presentation of their project for living on the Moon and during a contest sponsored by NASA, Foster & Partners proposed a modular residence made for life on Mars. Mars Habitat is a plan to develop a settlement built by semi-autonomous, pre-programmed robots. By using a 3D printing system, it will develop robust living modules that will be able to house up to 4 astronauts. On top of that, these residences will be built from Mars' own rocks. The robots will be configured and sent before the astronauts arrive.

The project ICE House stands out as the winner of the “3D Printed Habitat Challenge” sponsored by NASA. Here, using native martian materials and 3D printing, SEArch (Space Exploration Architecture) and Clouds AO (Clouds Architecture Office) use frozen water as a crucial element to protect the hypothetical residents from radiation. Using ice's ability to filter the sun's rays, ICE HOUSE prioritizes life on Mars, distinguishing itself from the many projects that opt to cover up their prototypes.

Spanish architect Alberto Villanueva from the IDEA Architecture Office, with his Mars Utopía project, proposes using materials from Mars' own surface and mycelium from fungus, an element known for its structural qualities and its ability to tolerate extreme conditions, to create a small atmospheric layer over the planet to make it habitable. His proposal also includes bio-luminescent bacteria as an organic solution to generate light on the planet.

Related Reading: Elon Musk Announces Plans for the Colonization of Mars in 2022

The architecture studio Clouds AO, which we mentioned earlier for its design utilizing Martian ice, also has a proposal for an innovative building suspended 5000 km in the air. The hypothetical project hopes to implement skyscrapers in a geo-synchronized orbit, sharing their orbital period with the Earth's rotation. Being suspended in air, they could be built anywhere in the world and afterwards transport themselves to their atmospheric resting place.

Editor's Note: This article was originally published on September 08, 2019. 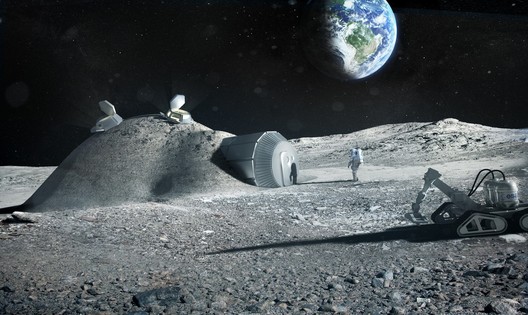