Ascension was made to represent connections between the past and future. The design explores nature and the man-made, old and new, as well as ground and sky to create a flow and visual relationship. As one of the famous stops of the Orient Express, Zagreb has long welcomed artists, actors and writers throughout history. The site for Ascension is literally in the middle of the city on the camber of River Sava and on the border of Novi Zagreb Zapad. The location faces the river, the forests of Medvenica mountain and the landmarks of the city.

As the team states, "the historic city of Zagreb is composed of a medieval urban complex of churches, palaces, museums, galleries and government buildings which make it a popular tourist zone. The city expanded east and west during the first half of the 20th century. The second half gave way to constructions to the south of River Sava, resulting in “Novi Zagreb”. For decades, New Zagreb was largely left alone due to its lack of cultural, public and commercial facilities."

Today, New Zagreb is changing, with emerging office buildings, sports halls, shopping centers and a museum alongside open, public spaces. Ascension creates a focal point to the plaza located at the intersection of the main retail streets connecting the River Sava to Dubrovnik Avenue. Facing the old and the new city, Ascension connects the riverbank with the greenery of a new urban development. 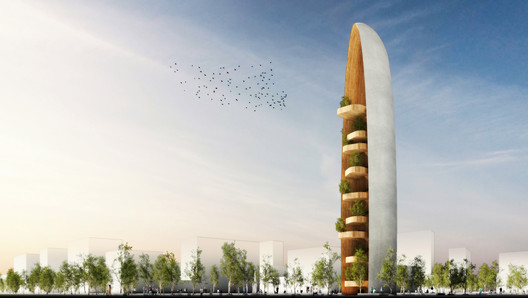