All
Projects
Products
Events
Competitions
Save
Could 3D Printing be the Future of Social Housing?

This is all quite recent: less than a year ago, a French family became the first in the world to live in a 3D printed house. Short of 20 years, this seemed like a distant dream, this new technology has developed quickly, and it arises as a possible contribution to the housing crisis around the world.

The Chinese company WinSun was the first to build a 3D printed house, and in 2013 it was able to print 10 houses in a period of 24 hours. These homes required human assemblage, given that their walls were printed at a plant to be transported to the respective sites. The San Francisco startup company Apis Core successfully built a residence of this nature as their final domain in a single day in the year 2018, the process was worth around $10,000 USD. Dubai, on the other hand, has created a plan for a fourth of the new buildings in the city to be 3D printed by 2025. This initiative was created to promote the United Arab Emirates and Dubai as its technological center for 3D printing. The city is striving to become the world leader in 3D printing for civil construction.

NASA promoted a contest to encourage architects and engineers to explore alternatives and possibilities for the construction of habitable constructions in outer space. The winner developed a prototype for 3D printing 3 meters high, composed of biodegradable and recyclable basalt derived from natural materials found on Mars. One of the main obstacles in the colonization of the moon is the cost of material transportation and the (foreseeable) difficulty to get in situ work crews. 3D printing with native materials and computer-controlled robots could eliminate these obstacles, thus placing structures and even environmental systems to allow human livelihood. NASA is supporting a viability studio designed to determine whether it is possible for a colony to be established.

Devices of 3D printing in concrete offer a quick and economic method for civil construction, thus creating three-dimensional shapes through a computer-controlled process. A machine basically disposes layers of concrete that gradually build the walls of the house, needing only a small crew to operate it remotely via tablet. This process consists of three parts: data preparation, concrete concoction, and the printing itself. In civil construction, 3D printing is particularly useful to fabricate geometrically complex components. Although the upsides don’t end there: due to the reduction of construction time, this technology promises less energy consumption, lower costs and reducing residue production. As any other innovation nonetheless, there’s still a lot to work on and to develop until it represents a viable, sustainable and widely utilized one by the industry.

Some people think it is difficult for 3D printing to replace traditional methods, but clearly, this technology delivers quite practical solutions. Starting with the aforementioned construction of conspicuous shapes that barely existed in construction projects so far. Another one to consider is in case of disasters: whenever a hurricane or an earthquake destroys infrastructure leaving thousands of people homeless, 3D printers can be used to quickly rebuild bridges, highways, and residencies. Finally; due to its low cost and high efficiency, 3D printed housing can become a practical option for subsidiary habitational projects. Check out some characteristics of large-scale 3D printing below: 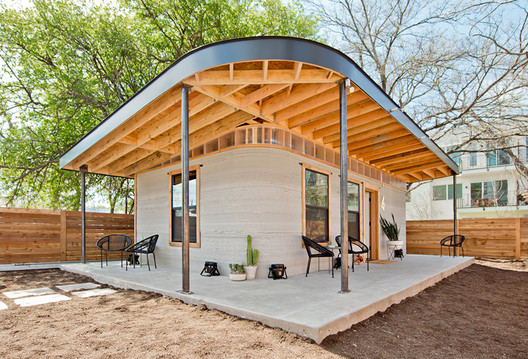