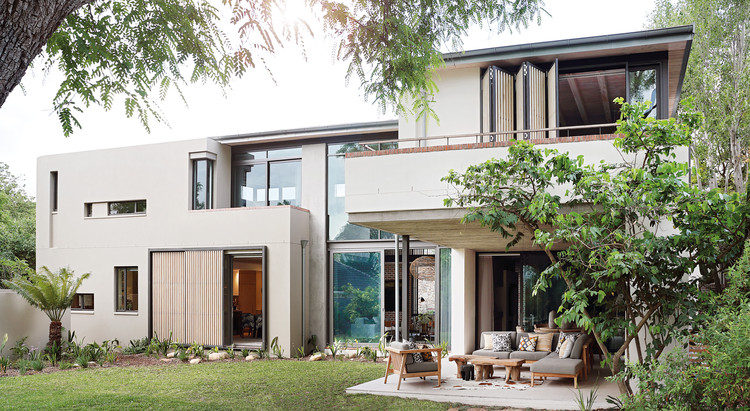 “We want light, light and more light, we want to be aware of the mountains around us and we want to still enjoy relaxing under the huge Tipuana tree in the back garden. We live close to the earth, we are not clinical and we prefer the texture to color.” The brief was simple.

The decision was made to demolish and rebuild. In addition to the spectacular Tipuana and the reworked fire pit underneath it, we kept almost all the existing trees on the property, as well as the stone retaining wall built by the owner many years before.n The guiding idea of connecting the North facing front garden with the back garden is expressed through the central double volume which accommodates the lounge, distributes light through the body of the house and connects the house spatially and with its context through the tall glazing on both sides which visually bring the Tipuana and the mountains into the house. A strong emphasis is placed on creating an uninterrupted flow of nature through the house.

The circulation is defined by a strong structuring wall running East-West and perpendicular to the indoor/outdoor connection. The entrance, which is slightly hidden, entices one into the house and slowly reveals light and volumes before it ends with a row of poplars at the end of the living space. Water is used to separate, define, and create spaces. It is also collected off the roof, filtered and used extensively for consumption. Water from the ‘leiwatervoer’ is stored and used for irrigation, augmented with borehole water. The house largely runs on solar power and during winter a water-based underfloor heating system is assisted by three fireplaces.

Both in terms of form and materiality, the house speaks of its location. The simple rectilinear form of the body of the house is roofed under poplar beams. The palette of materials is kept simple but rich in texture with a strong emphasis on, and reference to cape tradition. Our intention to build a new home for the family on the same site where they had lived for twenty-four years, is echoed in a comment from our client: “Upon entering the house, one has the welcoming sense of homeliness, warmth, light, space, and peacefulness.” 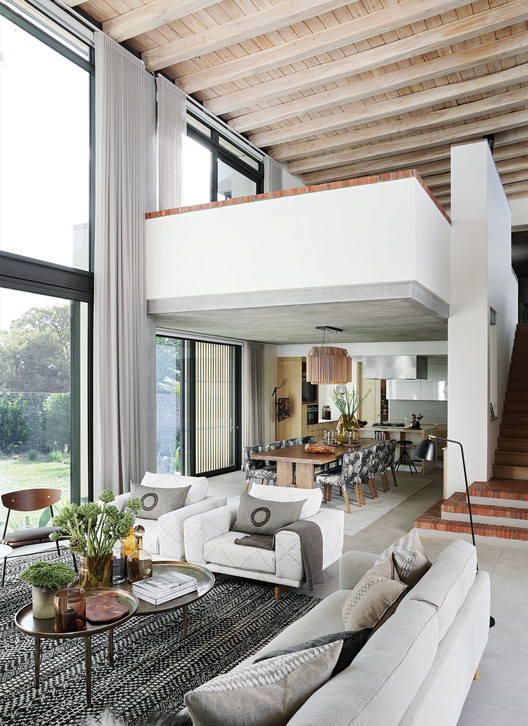