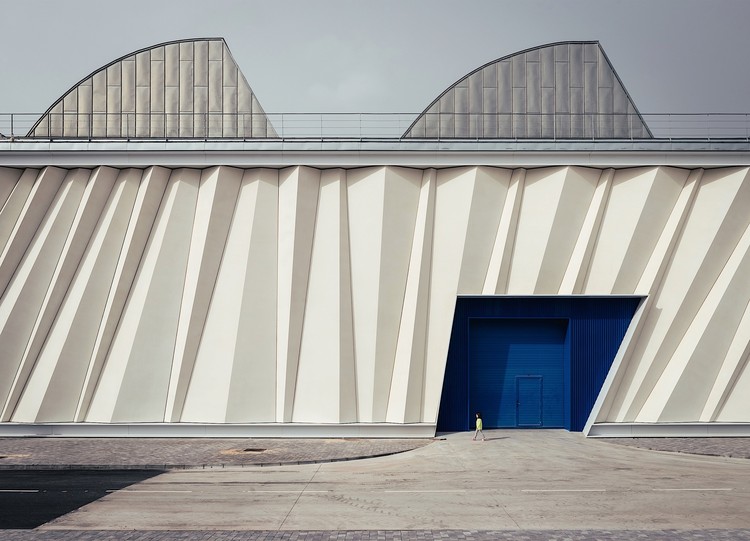 Text description provided by the architects. The project consists of the rehabilitation of the industrial textile complex of Intelhorce (1957-2004), transforming it into a new logistics centre for Mayoral Children's Clothing company in Málaga. To do so, the old finishing hall is recovered, preserving its spectacular interior space and its concrete structure while adding a new envelope.

The design of the new facade formed by folded GRC panels improves the energy efficiency of the building while it expresses the dynamic concept of the "fabric" as a representative material of the textile industry to which this building has always been dedicated. At the same time, the rest of the plot is prepared for the future expansion of the company with sustainable landscaping solutions.

The rehabilitation of the main building (Vázquez Molezún, Valdés, 1963) is based on three fundamental objectives: The recovery of the existing structure as the main element of the project; The improvement of the energy efficiency of the building and its adaptation to its new use; The design of a new skin that represents the philosophy of the company.

The main challenge was to integrate these three objectives, and this is how the design strategy arises: to create a solar protection system using the concept of "the fabric" as the driving idea for the final form. "A dress that protects the building from the sun". Using the largest GRC panels manufactured in Spain, a new facade is created as a "pleated skirt" that reduces solar radiation by 39%.

To integrate the folds of the new facade into the actual building, the proportions of the cross-section were used in such a way that the scale and shape of the panels are based on a geometric process of modulation of the existing structure, using the inclination of the teeth of a saw as the main direction.

As for the design of the expansion areas, the land was prepared with a low-cost landscaping solution for more than 10 hectares that would allow occupying these areas with future buildings. Recycled materials from the demolition of the different buildings of the complex were ordered following the pattern of the structure of a wool fabric, creating a decorative arrangement that orders the exterior areas.

The whole project has been carried out using bioclimatic strategies where the use of different simulations and digital analyzing tools have been crucial for reaching the different formal and constructive solutions.

Among the main construction challenges to be overcome, in addition to the repairing of the original concrete structure, was the manufacturing and commissioning of the GRC panels that were used for the facade. With a hight of more than 13.5 m, they are well taller than the recommended 7.5 m. However, thanks to their folded shape that increases their rigidity and the increase of the GRC shell, their viability was achieved. It was necessary to employ a tool used in the aerospace industry for the installation, given the geometric complexity of the panels, the inclination, and the variation of their centre of gravity. 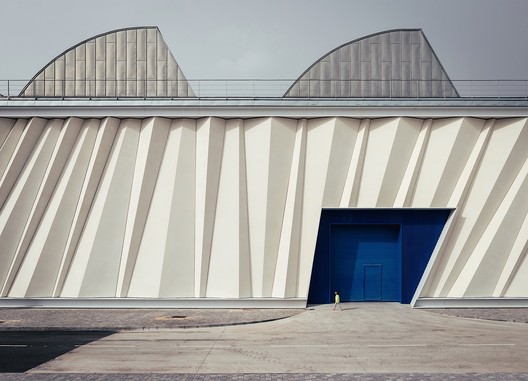