Save
"We Designed an Exhibition that Presents the Bauhaus in all its Dazzling Diversity": Barbara Holzer Explains her Design for the New Bauhaus Museum
Share
Or
Copy

On the weekend of the 5th-7th of April, the city of Weimar celebrated the opening of the recently-completed Bauhaus Museum, along with its permanent exhibition of the 100-year history of Bauhaus.

Located near the Neue Museum, the concrete structure was designed by German architect Prof. Heike Hanada. The architect followed the school’s minimalist approach, and developed a 5-storey cubic building, with a clearly defined geometric form and horizontal grooves all around the facade. The museum’s permanent exhibition, which was designed and curated by Barbara Holzer of Holzer Kobler Architekturen, houses the world’s oldest Bauhaus collection, bringing forth debates on contemporary design and showcasing the school’s most notable inventions.

In an exclusive interview with ArchDaily, Holzer explains the creative process of designing the exhibition space, and some of the challenges she faced while exhibiting Bauhaus' distinguished works. 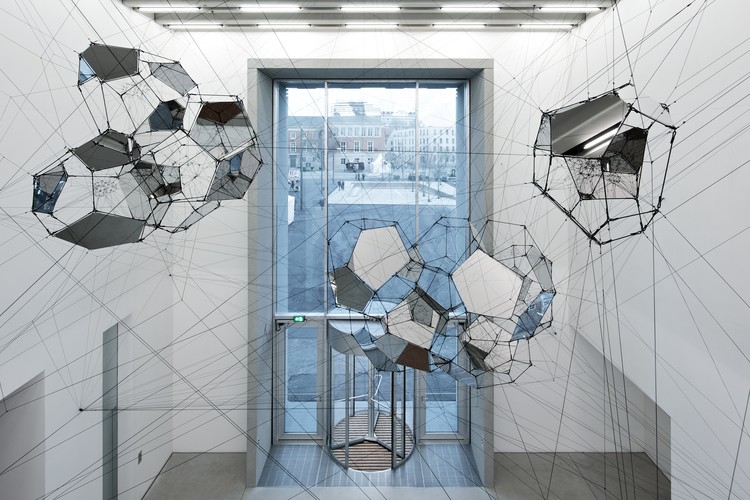 Dima Stouhi: How did you come up with the exhibition's design?

Barbara Holzer: Three new museums are opening in the original Bauhaus locations Weimar, Dessau and Berlin to celebrate the 100th anniversary of Bauhaus. The new exhibition in Weimar – the origin of the Bauhaus movement – will add an important element to Weimar’s significance as a centre of modernism and culture. Holzer Kobler Architekturen designed the permanent exhibition in the new Bauhaus-Museum. We started the conception of the exhibition with the question of “How do you constitute an exhibition for the Bauhaus design icons”?

BH: This is a very complex topic! For the presentation of the oldest Bauhaus collection, we designed an exhibition architecture that presents the Bauhaus in all its dazzling diversity, innovation and progressiveness without ignoring the ambivalent traits of its history and reception. The exhibition design reacts to the spatial structure of the new building and presents the history of Bauhaus and its collection, organized thematically. The design of these themes is varying and follows the particular statement of each chapter.

BH: The exhibition tour starts with the Bauhaus Manifesto as the intellectual introduction to the history of the Bauhaus. The Manifesto is shown on a large-scale animated light installation that is suspended in one of the exhibition galleries. The media installation underlines the influence of the Bauhaus movement in its early phase and introduces the visitors in its conceptual premises. “The New Man” – the first chapter on the tour – explains the idea of re-inventing the role of man and woman in society. An impressive series of photos, films and sketches – presented similar to an ancestral portrait gallery – shows the various drafts of the “new man”, visions of standardized living, geometric forms and measured subjects created at the Bauhaus. Tables stacked and intertwined with one another are used to display a plethora of different works created by the masters and students of the Bauhaus in Weimar – as a kind of amuse-bouche showing the plurality of experiments performed at the Bauhaus.
The exhibition showcases the oldest Bauhaus collection in the world and is completely unique. Furthermore it is not only focused on the time in Weimar, but connects its history to Dessau and Berlin.

DS: What were some of the challenges that you faced while designing the exhibition?

BH: In my eyes, Bauhaus represents one of the most radical design movements in history. It is clearly an enormous challenge to design an exhibition architecture for this Avant-garde School.
What is the best way to exhibit Bauhaus? How can we show the many objects strengthening their visual presence in space?
Visitors are triggered by visual experiences. An exhibition must be interesting, fascinating, beautiful, and sometimes irritating. Visitors should have the freedom to wander from topic to topic following their own interests and the attraction of the displays. We wanted to create a very minimalistic exhibition design in order to emphasize the objects. Focusing on the details, we developed a delicate and elegant construction system intended to specially upgrade the presence of the historical objects as genuine witnesses of that time.

BH: The conservational and security requirements on the Bauhaus collection are very restrictive and limit the possible forms of presentation. These restrictions forced us to be very creative in our design decisions. The simplicity of the form, the reduced presentation and the minimal use of materials give the exhibition architecture a timeless and at the same time contemporary look. We used only three materials for the construction of the entire exhibition. We focused on steel, glass, and fabric, no composite materials, no classical pedestal. The reflective surfaces and colour accents highlight the content and the objects in the exhibition. Artistic media installations, film and sound accompany the unprotected objects and open new layers of perception which brings the history into the present. In spite of the seemingly unlimited possibilities of computer aided design and digital fabrication currently available, we chose clear and elegant forms a sort of fragile “tableau”. This vulnerability in the form of presentation refers to the need of protecting cultural, liberal and innovative movements through the ages and particularly today!

DS: How has Bauhaus influenced your work?

BH: I’m Swiss, and I studied at the ETH Zurich. The influence of Bauhaus was very present at the time I studied there. The output of the Bauhaus remains influential in my work and education. It was a very significant and important style. I truly admire he Bauhaus movement. However breathtaking it may be, one must not forget the critical aspects of it! I think the idea of the Bauhaus is increasingly relevant today. In our increasingly restrictive world the responsibility for society to be re-inventive, respectful and tolerant, are, today, cutting edge.

DS: What would Bauhaus be like if it were happening now?

BH: Oh, what a question! If there would be a Bauhaus today, I think it would be a digital one! I believe digitalization softens all our traditions: where we live, how we live, how we communicate, the way we work... Everything that we learned while growing up, will end in a completely different system. It is comparable to the industrial revolution! I think the digital revolution is and will lead to a truly powerful revolution which will advance and enhance our design culture dramatically.