Studio Gang has been selected to lead the $8.5 billon O'Hare 21 International Airport expansion in Chicago. Chosen from a list of firms including BIG, Calatrava and SOM, the Studio Gang team is part of the Studio ORD partnership. They won the project for the Global Terminal and Concourse with three volumes converging in a central hub. Designed to celebrate Chicago’s history as a city shaped by lines of movement, the project represents O’Hare’s first major overhaul in 25 years.

Studio ORD's winning proposal was made to establish a vibrant new neighborhood in the heart of O’Hare’s campus. The tripartite design merges terminal and concourse into a single building. At the branches’ confluence, an Oculus welcomes visitors under a six-pointed glass skylight. Beneath the Oculus, a Central Green was created with planters, trees and street furniture as a flexible space for diverse programming.

Surrounding the Oculus is a rhythmic, pleated roof of long-span steel trusses. Clad in wood and emphasizing the building’s curving form, the pleats are spaced and oriented to maximize natural daylight and energy efficiency. When seen from above, the building’s form takes on a distinctly Chicago icon: the city’s “Y symbol,” or Municipal Device, that represents the branching Chicago River.

The remaining four teams are in the running to design two new satellite concourses adjacent to Terminal 1. As the City of Chicago states, "In the coming months, a second team will be selected from the remaining four finalists to design two new satellite concourses to be built west of Terminal 1. This unprecedented expansion will elevate the travel experience for more than 83 million passengers relying upon O’Hare each year, and will create tens of thousands of jobs for the community. The expansion will be paid for by airport revenues, not taxpayer dollars."

"The City of Chicago called upon teams from across the city and around the world to lead O’Hare’s historic expansion, and Studio ORD answered that call," said Mayor Emanuel. "During this historic competition, the world’s best architecture firms submitted their incredible visions for the world to see—with each of these five world-class designs strengthening our plans to bring O’Hare into the 21st century. Today we congratulate Studio ORD who has proven they have the experience, expertise, and the talent needed to work with the City of Chicago as we usher in a new era at O’Hare."

The multi-phase O’Hare 21 project aims to break ground in 2023 with completion scheduled by 2026. 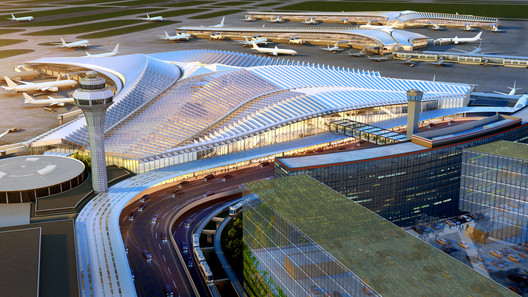