SOM has revealed their design for the world’s first floating eco-park along the Chicago River. Called Wild Mile Chicago, the project is sited between Chicago and North avenues along the east side of Goose Island. A group of ecologists and activists called Urban Rivers is working with the city to realize the plan. The mile-long project is being created with government officials and private developers to include new wildlife, recreational and educational additions to the river’s North Branch.

The intention of the The Wild Mile is to grow a natural habitat in Chicago's channel system through the floating eco-park, which utilizes pre-existing channel walls to support floating wetland and aquatic habitats while also forming a unique environment for canoeists and kayakers alike. As a collaboration between Urban Rivers, SOM, the City of Chicago and related Chicago institutions, the floating project will provide a habitat for a diverse group of species and pollinators while offering unique recreational and educational opportunities for the urban environment.

The floating eco-park idea was first included in the city’s North Branch Framework Plan that was approved by the Chicago Plan Commission. Today, a volunteer-led initiative of The Wild Mile called River Rangers, citizen scientists report daily throughout the site on a specific subset of plants. Each volunteer keeps track of pollinators, wildlife in the area, plant health, and other conditions. The data collected is then recorded by the volunteers on an app built by The Wild Mile team to maintain timely details regarding the success of each plant.

The groups are aiming to finalize plans by March, and the larger Wild Mile Chicago project is scheduled for completion by mid-2020. 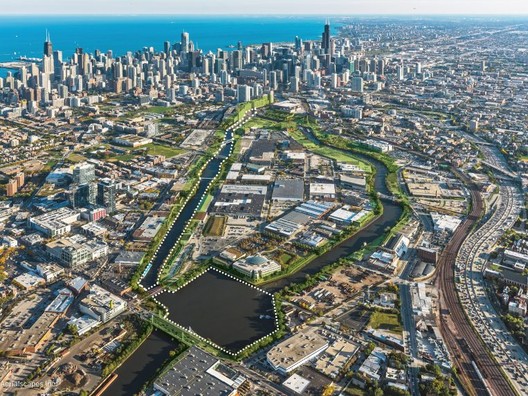