Text description provided by the architects. This dynamic two tower structures + urban complex, which is home to the regional offices of the iconic British brand, Land Rover, was meticulously thought-out and designed to reflect the local culture, create a people-centric yet unique biophilic environment, and with the idea of a porous urban fabric in mind.

Serving as a powerful metamorphic and symbolic tool—the buildings transform with the city’s atmosphere through the application of a custom fritted glass pattern, which emulates Chinese bamboo when seen from afar. The patterned exterior surface not only pays tribute to the importance of bamboo in Chinese culture but contributes to the overall efficiency of the building by providing natural shading and privacy for occupants.

Design intent reflects Chinese culture.  By incorporating a complex frit pattern on the glass-paneled facade of each tower through the use of parametric and digital fabrication tools, FGP was able to create a pattern that depicts bamboo. The abstraction not only serves to distinguish a unique and dynamic building that changes with the light but to essentially reflect—both metaphorically and physically—two important aspects of Chinese culture. For perspective, China grows over 400 species of bamboo and the plant is frequently referenced in ancient Chinese literature. Bamboo is not only a symbol of traditional Chinese values but is also seen as a reflection of harmony between people and nature—which also harmonizes with the idea of a porous urban environment and biophilic design. The opaqueness rendered by the pattern also serves to cater to a still-developing need for privacy in the country while keeping everything open and welcoming. The bridges connecting the various structures serve a two-fold purpose—they reference the popularity of this design aspect in the country’s culture while also contributing to an interconnected yet porous urban environment.

Create a porous environment. The idea behind this is essentially people-centric with aspects of biophilic design. To combat the tendency to overdevelop, FGP kept the inner area of the urban complex open. In this manner, the landscaped courtyard-like area enhances rather than degrades the surrounding environment while also encouraging inhabitants and/or visitors to interact with nature and each other. Similarly, the addition of a rooftop garden on each tower promotes biodiversity while also contributing to health and wellbeing—yielding much more than just another aesthetically pleasing place.

Inspire connectedness. The implementation of bridges that connect the various structures also plays to the idea of interconnectedness and how the built environment can be used to enhance the connection between people. By leaving the large-scale buildings on opposite sides and on the outer lines, the inner area begins to take on the feeling of a small sanctum in the middle of an urban complex, yet also serves to provide a visual sense of arrival when transitioning between buildings. A contrast to the ‘walled city,’ the bridges imbue security and openness, is open 24 hours, and feature long expanses of uninterrupted glass rather than ‘fortress gates’.

Leverage technology. By utilizing parametric and digital fabrication tools to achieve the abstraction of the bamboo on each glass panel, the design concept for each tower was realized with 52 panels rather than the 500 it would have taken without the current technology. Besides the cost-prohibitive factor, the building’s footprint was greatly reduced. The use of technology also aided in creating vivid, distinctive imagery that truly renders the towers unique. By wielding every tool available, FGP was able to build cutting-edge towers at a much lower cost, with far fewer materials, and in a period of time that would not have been foreseeable in regards to this project even 10 years ago.

Create a stunning showroom space.  By designing an open, modern space on the ground level, FGP created a visual contrast between the scale of each building. While the towers are much taller than the surrounding buildings, they are perfectly situated so as to enhance rather than to take away from the neighboring structures. The contrast in scale shines attention directly into the open showroom—a fact Land Rover did not miss during the construction phase. Enamored by the modern showplace lobby, they became the anchor tenant.

Design innovation - Fritted glass pattern The buildings’ unique facades were designed through the use of parametric and digital fabrication tools to create an abstract pattern that mimics bamboo. By printing countless dots on the surface of each glass panel in a predetermined yet complex frit pattern, the area is not only rendered opaque but from afar, forms the shape of bamboo in the eyes of the beholder. This pattern is achieved through the use of 52 unique frit glass panels that have been combined in a range of manners to achieve the striated effect and would not have been possible without the use of this technology. The multipurpose aesthetic not only reflects an aspect of Chinese culture that is quite important to the country but through the opacity rendered by the application of the pattern, it provides the building with natural shading and some privacy. Natural light makes the pattern come to life—As the sun hits the opaque portions the buildings themselves appear to be set aglow as the glass reflects the light.

Building location + orientation . Reference point: On the broader portion of the complex, the (directional) tower is bracketed by the busy Jiyang Road to the east, the Chuanyang River to the north, the Huangpu River to the west, and the Middle Ring Road to the South. The Quiantan District of Pudong: Pudong is the driving force of Shanghai’s economic and social development, serving as the base to the city’s free trade zone, it has become a premier destination for investors, talent, and innovators. By 2020, Quiantan is expected to become a new core international business community in Pudong. Two buildings set at diagonally opposed corners of the site define the urban complex. The orientation allows for an open plaza that creates a linear path directly between each building and seemingly directs towards the sports complex on the west. The plaza is further defined by low-rise retail buildings surrounding the center and bounded by towers on opposing sides. Walkways connect the central plaza to each building and create a sense of community.

Land Rover’s regional offices and showroom are located in the northwest corner of the complex in the tower closest to the sports complex. The open-plan, light-filled arena overlooking the landscaped inner plaza serves as the perfect showplace for the iconic brand. 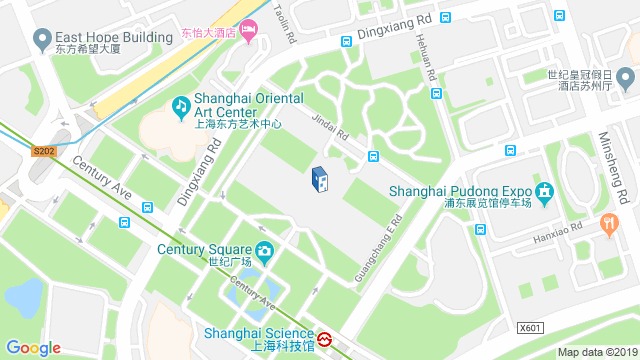 Location to be used only as a reference. It could indicate city/country but not exact address.
Share
Or
Copy
About this office
FGP Atelier
Office
•••