The park’s 30 acres are divided into four zones defined by topography, vegetation, pathways, and architecture. Inspired by the unique features of the Mississippi River Basin, the four zones flow together to support a range of active and passive uses, and create a template for the civic and ecological revitalization of downtown Memphis.

The dynamic forms of the Mississippi River Basin itself inspired a series of rooms in the park, creating a unique template for diverse civic spaces and ecological revitalization.
-Kate Orff, Design Director, SCAPE

“The Gateway” will serve as a “welcoming new connection linking downtown Memphis to the riverfront” while bringing new life to the east side of Beale Street Landing. A new entry plaza will accommodate public gatherings, art installations, and festival tents, accessed via a universally-accessible pathway along Beale Street. Meanwhile, the park’s central zone, “The Riffle,” will be defined by a dynamic topography that shapes areas for play and relaxation. A signature canopy will shade activity courts designed for sports and special events, complete with “eco edges” to give people an intimate experience of the water.

“The Pool” will offer a network of open lawns that act as the park’s anchors for field activities and large events, such as the Beale Street Music Festival. The spaces will also host smaller scale, everyday recreation such as field sports, picnics, and kite flying. Finally, “The Tailout” will sit at the southern end of the park, where the landscape will become wild, active, and accessible. Recreation paths will lead to outdoor learning and play areas, such a large outdoor classroom to host STEM programs facilitated by a scientist-in-residence. The area’s centerpiece, the dramatic Habitat Tower, offers an attractive structure for birds to nest and rest, and a memorable gathering space for visitors to absorb views of the Mississippi.

Our design builds upon two years of work alongside Memphians, which began with the Riverfront Concept, our proposal for the Riverfront as a whole, and is inspired by the extraordinary work that today’s Memphians are doing for their community. The new Tom Lee Park will be a civic space for everyone in Memphis to enjoy. We’ve designed the architecture to float in the landscape like vessels on the river, creating a park that uniquely reflects the changing nature of the Mississippi River and the city along its banks.
- Jeanne Gang, Founding Principal, Studio Gang

With a focus on human and environmental health, the scheme will include a one-mile fitness loop with workout equipment, as well as natural and technical systems to mitigate water pollution, provide habitat for wildlife, harvest energy with solar panels, and collect stormwater for reuse. Regionally-appropriate flora and fauna will enable to ecological restoration of the riverfront, while new plantings will improve tree canopy shade for park goers.

Construction of the scheme is expected to begin in June 2019, with completion by the end of 2020.

News of the scheme follows shortly after Studio Gang’s proposal for Chicago O’Hare’s Global Terminal was one of five selected to go to a public vote. Meanwhile, SCAPE recently proposed a radical plan to combat climate change along the Boston waterfront.

Kate Orff shares her vision of 'oyster-tecture' utilizing oysters as an agent for urban change. Focusing on the New York Harbor, Orff, architect and... 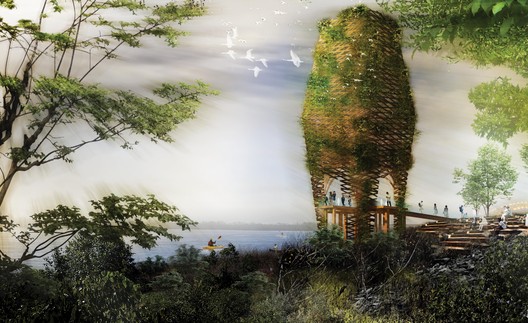