Text description provided by the architects. The New Headquarters of the BioCruces Institute is a new-build building destined to house the research areas and animal facilities. The programme is distributed over 8 floors, 3 of which are basements. Above ground level, the floorplan is divided into two blocks of laboratories (North and South blocks), separated by a block of common areas on the East elevation and the communications core which is adjacent to the West façade.

Being a building for laboratories, in continuous change, and with new techniques and technology appearing every day, it was considered that the building should have great flexibility so that it could adapt to possible future changes. With the exception of common cores, shafts and fire zones, the building was designed with modular systems that allow for an easy compartmentation and access to the building services in both ceilings and walls. One of the keys to the project was the engineering behind the building services which have a repercussion and complexity far greater than those of a normal laboratory.

The construction of the building was conditioned by the plot, being only just big enough for a building of these characteristics. Hence, the building is stretched to the very limits of the regulations, leaving the East façade, the building’s main elevation, just fourteen meters away from a twelve-storey high block of flats. The West and South elevations are just 6 meters away from other buildings in the complex. The North façade has greater amplitude, despite it going as far as one of the entrances to the hospital facility.

From a formal point of view, the building was so limited volume-wise that strategies focused on the formalisation of a curtain-wall type façade, where a dense weave of slats offers protection from direct sunlight and sightlines from neighbouring buildings. This sieve was reinforced by a subtle serigraphy of white dots on the glass which grant more privacy to the inside even without the use of roman blinds. Only in singular areas like vestibules or resting areas was this reticule interrupted to give way to big windows which would prove its different character. The building’s image was reinforced by the colour white, contrasting with the environment and offering a sober and aseptic image. This strategy was extrapolated to the plot’s fencing in order to unite the building to the other laboratory block of the hospital, also designed by IDOM, resulting in a research terminal within the hospital complex.

Interior spaces follow the storyline started by the façade, white and light colours filling the building so that working areas are well illuminated and pleasant. These spaces contrast with the wood in the main vestibule and the resting room, which grant them greater representativeness and warmth. Occasionally, colour plays a role inside the building to offer relevant information to its users. 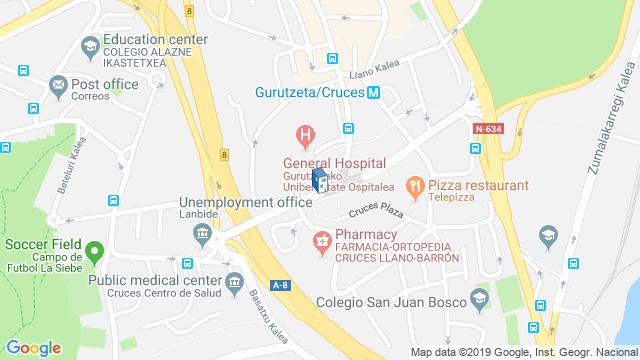 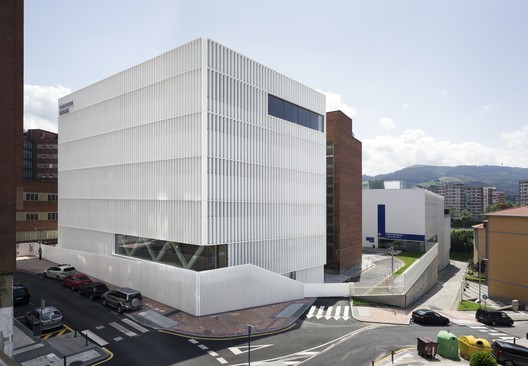