Text description provided by the architects. Next to the Gushan Ferry Pier that connects Kaohsiung to Cijin is a FamilyMart. Further down the road is a Watsons. Continuing along it is a series of storefronts, most of which are delis and dessert shops.

Would anyone have ever wondered what is behind this row of shops?

Indeed, if you take some time to get around to it, you will discover a local neighborhood situated just between that bustling road and the pier-side, where the place is decorated with some casually erected melon sheds, a small square in front of the temple, and plenty of randomly placed plantations. Above all, you will also be treated to some waterfront sceneries in the cool breeze as you stand in this subtropical city of Taiwan.

Thanks to the Urban Development Bureau, this homelike neighborhood is once again being introduced to the public by means of revitalization as opposed to eradication for something completely anew, opening up this modern city crevice that already brims with liveliness to the local residents. In addition, with the touch of Bamboo Yang, a brilliant graffitist from WALLRIORS, the colors of the basketball court are now in perfect harmony with the atmosphere of this place. Therefore, whether you are here for a nap, or taking your time diving into a bowl of shaved ice, or simply just looking for a chill-out spot, the canopy stands here, welcoming you with its spanning roofs. As if giving a massage to the city, this place helps it shed away some weariness of the everyday life, allowing the vitality to sprawl on without boundaries.

Materials and Tectonics
Given the limited time, it is necessary to utilize ready-made materials as much as possible in composing the pavilion. The existing reinforced concrete seats conveniently become the foundation of the canopy, saving all the time to be spent on excavation for other parts of the construction. The main structure is disassembled and reformed by two cargo boxes, the side panels of which made into sunshades and the frameworks into structural supports. All of which are then lifted up by 15cm*15cm H-shaped columns erected closely adjacent to the concrete seats, creating the necessary resistance against the sheer force. Finally, the texture of the southern pinewood flooring gives a sense of relaxation in providing an environment for the residents to rest underneath the canopy at ease.

Patterned Window Grills and the Wave
Various patterns of the window grills often leave vivid impressions to those who visited the Hamasen District. Techniques such as forging, welding, and bending are commonly used to create linear forms imitating images of flowers, grass, mountains and waterscapes. After the structural panels are removed from the cargo box frames, reinforced steel bars are added in respect of structural consideration, as well as to echo with the window grills of the neighborhood. During the day, when the sun moves across the sky, the silhouette of the horizontal bars on the ground reminds us of the sea waves and the ocean that warmly surround us.

A Glance of History
Temples in Taiwan are always the spiritual centers of townships, and the Wen Lung Gung Temple is no exception. As the project site is located some distance away in front of Wen Lung Gung, the height of the pavilion has thus been carefully calculated to not surpass the height of the temple rooftop. We also intentionally minimized the center structure by removing the sunshade panels in that area to preserve the visual continuity for the view through the central axis of the temple. 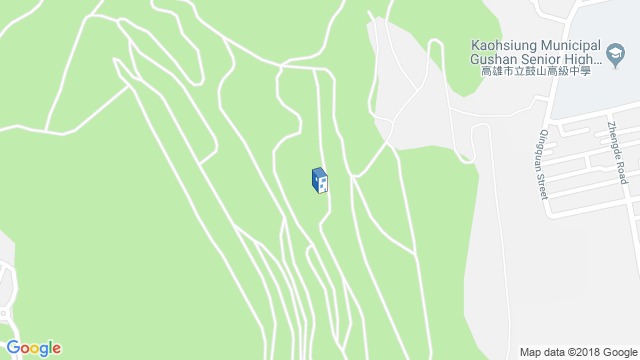 Location to be used only as a reference. It could indicate city/country but not exact address.
Share
Or
Copy
About this office
Atelier Let's
Office
••• 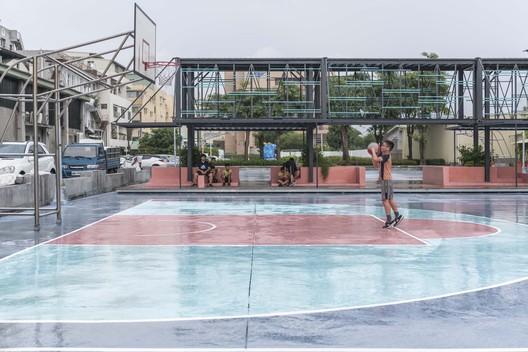