UNStudio has released images of their proposed Lyric Theatre complex in the West Kowloon Cultural District of Hong Kong. Intended as a “celebration of the world of theater,” the mixed-use scheme will house three theaters, rehearsal room, and dining, retail, and entertainment functions.

Designed to be open, inclusive, and welcoming, the compact scheme is comprised of a series of stacked transparent elements making the arts accessible to the general public. Open displays draw visitors inside from a series of reactivated plazas surrounding the scheme, supported by “an additional programme for the public to enjoy that is independent of performance timetable.”

The 41,000-square-meter scheme sits within an ambitious 40-hectare cultural quarter masterplan designed by Foster + Partners, containing museums, theaters, and concert halls. Sitting alongside the cultural nodes are a series of mixed-use residences, office buildings, and 23 hectares of public spaces connected along a two-kilometer harbor promenade.

The constraints of the site for the Lyric Theatre Complex presented numerous fascinating challenges for the arrangement of the various programmes within this very compact building. However, in the end we were able to create a vibrant building that celebrates the enchanting world of dance and theatre and will cater to the future needs of Hong Kong’s theatre-going public.”
-Ben van Berkel, UNStudio

The three theaters each embody an individual identity based on the types of performing arts they cater for, with distinct colors and intensities. The result is a complimentary family of theaters under one coherent structure, linked by a neutral central spine of circulation.

The largest of the three auditoriums, the 1450-seat Lyric Theatre, will house a variety of dance performances, musicals, operas, and film premieres. The most formal of the three spaces, the Lyric Theater “reflects the grandeur and distinction of baroque-era theaters through the use of red and bronze-toned details, while a combination of a cooler grey/brown toned wood adds a contemporary touch.”

The 600-seat Medium Theater will house theater and dance performances, striking a dark, saturated purple tone contrasted with a walnut interior and metal inlays. Departing from a traditional stacked approach, the upper and lower stall levels of the theater are visually united, only separated by a single geometric gesture to make the upper stalls float, hence creating an intimate, unified audience experience.

The 270-seat Studio Theater is dedicated to small-to-medium scale text-based drama productions. Featuring a “homogenous dark blue-colored interior,” the black-box-style space is encased in a single shell that also encompasses the front of the stage, creating an intimate relationship between audience and performers.

Linking the three theaters is a “Central Spine” with neutral tones contrasting against the vibrant theater interiors. Envisaged as an “inner alleyway,” the spine created a direct connection between the Artist Square to the north, and harbourfront to the south, slowly revealing the harbor view as one passes through the scheme.

The spine forms two curving, stacked ramps, combining to create a figure 8. While the lower spine leads to the Lyric Theater, the upper section leads to the Studio and Medium Theaters, before opening up to two skylight voids. To enable simultaneous performances across all three theaters, each space is given its own foyer with outdoor terraces overlooking either the Artists Square or harbourfront. The foyers combine with the central spine to therefore act as a “forth performing arts venue, creating a see-and-be-seen relationship between the public spine and semi-public foyers. 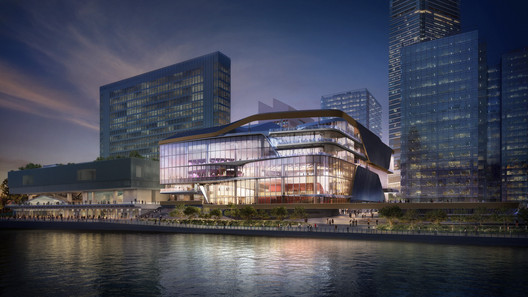