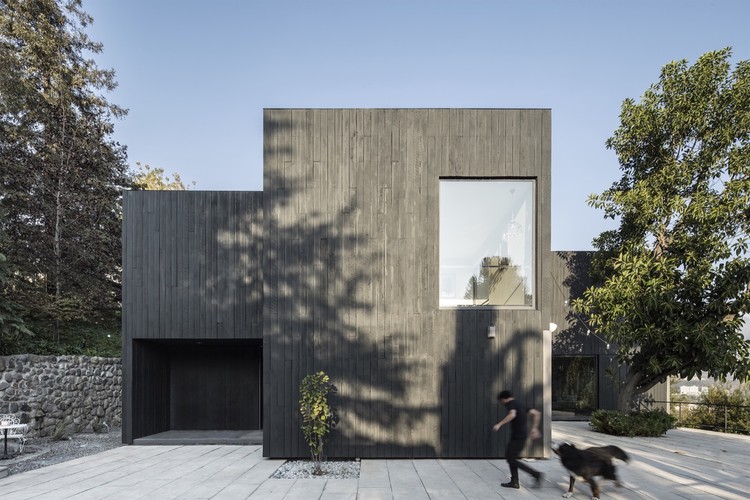 Text description provided by the architects. Palimpsests were manuscripts elaborated more than 1,000 years ago (VII century), which, due to economy, erased the traces of previous writings on the surface to give rise to the one that would come next.

The writing, although new, was recorded on a kind of testimony of the previous one, being able to cross many times the traces of one and another, diluting consequently the idea of ​​erased and new, giving birth to a mixed and binominal figure.
Zupe house is the result of this cross.

On land, the traces of the previous dwelling were left behind for the value of the horizontal ground on the slope, and as such, the new design assumes this geometry as part of its origin. The foundations and terraces define the position of the pieces, recognizing this geometry as the imprint of the preexistence that defines the general score of order in the territory.

The house, like a palimpsest, carries the imprint of the writing that preceded it so as to trace a new order without ignoring it. Its altitude, its perspectives, its bays and walls are consequently the result of a binomial governed by legacy.

On this sediment, the house is silent, simple, in the understanding that any contraption discredits the binominal reading of the ground and layout, fusing the new and old in a single body.

The basement of the house, which imports foundations and horizontal platforms from the previous dwelling, exposes the ground as a stony body, a podium, a leveraged base that nests a set of bodies of rough wood on its surface, all intersected and pierced by gaps that allow the interior to frame views over the valley, nourishing the spaces with natural light.

The silence of its forms is used to amplify details, materials and encounters that fill the work with a particular vision on design. Doors, windows, furniture, skies, pavements, tiers, guardrails, they all form a catalog of clearly defined pieces, articulating a contrast between its silent order and the complexity of its parts.

Like a Siamese body, Zupe house ties preexistence by understanding it as a geographic ally, as a ground with an altitude, and a height with a horizon. The other half completes this premise only by understanding that the score was already written, like the palimpsests from the VII century.