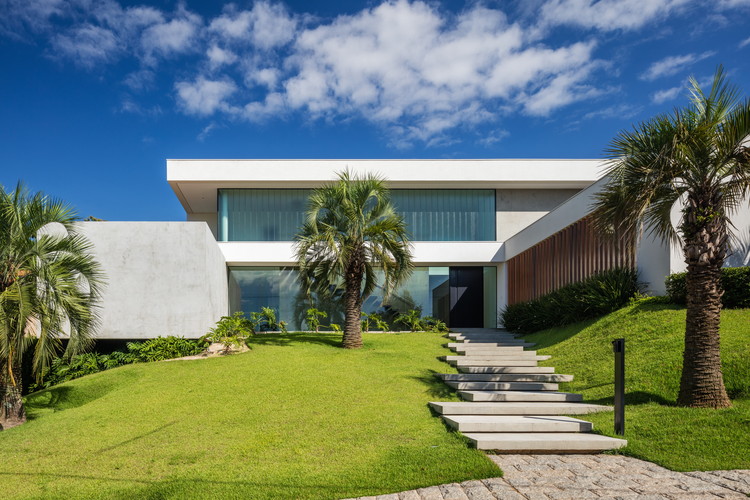 Text description provided by the architects. The minimalism of shapes and the straight lines of the design are evident in this residence. This premise came from the client himself, an admirer of architecture and contemporary art. As a continuity to this minimalism and visual cleaning, the closures and openings of the project are presented in a light way, justifying and composing the sectorizations, circulations and perspectives adopted. The main volume featured is drawn by a continuous white line, which merges with the wood and glass and rests on a rocking concrete block.

The concrete marks the private social functions of the house and the continuous white volume houses the service and leisure areas on the ground floor. In the void resulting from the joining of these two volumes are the rooms, located in strategic and central position and that open totally to the leisure area. This same block of concrete crosses the ground in a north / south direction and presents itself on the rear façade with a large horizontal opening. On this façade the rooms are facing north and overlooking a generous preservation area which is also an integral part of the land.

This project, designed for a family of 5 people (couple and 3 children), intended to propose a practical home that aesthetically reflects the client's admiration for art and design. As a sculpture, the Guaicá Residence lands elegantly on the ground, taking advantage of the topography to create the internal and external spaces. The entire front face of the residence is covered by a large Uglass glass plane, which creates horizontal and vertical perspectives. As the person approaches, the façade reveals a long swinging metal staircase attached to a crude reinforced concrete structure. The concrete, kept apparent with the markings of the metallic formwork - works as a structural gable and also as a minimalist backdrop of the house decoration - also signed by the Padovani Arquitetos office.

The decoration was directed to house the works of art that go from Alfredo Ceschiatti to Martins de Porangaba; from Geraldo Teles de Oliveira to Willem de Kooning. The national travertine marble is applied in all internal and external environments of the ground floor. On the top floor, the wood appears to give comfort to the intimate surroundings. A large, continuous sliding panel in ripped cumaru wood (vertically) appears on the rear facade as external locking of the rooms.

The dialogue between indoor materials and natural lighting takes place throughout the day, creating light and shadow effects, precisely controlling the intensity for each space. At the bottom of the terrain is the pool that was set at a higher elevation, with the infinity edge being thought of inverted. Instead of turning to the landscape, it is done in the opposite direction. Thus, from the leisure area of ​​the house the water frames and continuously reflects the lines of architecture. 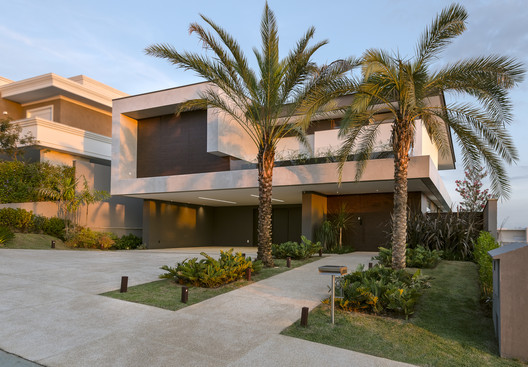