Text description provided by the architects. Klencke (or Terras op Zuid) is a residential complex with a distinctive stepped profile that provides supersized outdoor spaces with a spectacular orientation.
Klencke contains 50 units and will soon go up on the so-called Zuidas. The Zuidas is the CBD of Amsterdam; a point of gravity that absorbs financial institutions, law firms and related services, the La Defense or the Canary Wharf of the Netherlands.

Klencke is strategically located at the border of the inner city: a 5 minute walk from an elegant shopping center, a 5 minute bike ride from the economic heart and 5 minute drive from the highway. Work, sports, recreation: all within reach. The nearby station brings you in no time to the airport.

The site is somewhat hidden alongside a lush canal that is part of the ‘ecological framework’ of the city: an unexpected green oasis.
The building exploits its particular position. The north side faces the Zuidas and the inner-city in the distance, the south side opens up to the garden city called Buitenveldert. Klencke forms a ‘switch’ between urbanity and greenery.

Buitenveldert is a post war expansion of Amsterdam with a rational, Modernist layout featuring a mix of high and low buildings: Light, Air, Space. It is considered the ‘Pièce de résistance’ of Cornelis Van Eesteren’s so-called Algemeen Uitbreidingplan; Modern and yet well-liked!

Klencke is placed parallel to the canal to fully take advantage of the position along the water. And since the residential area on the other side is facing east – west, perpendicular to the waterway, a really attractive vista opens up for the prospective inhabitants.

Living in the city is increasingly attractive but often implies a sacrifice: lack of outdoor space. But not at Klencke. The north-south orientation induces the introduction of a specific residential type: stepped housing. Each consequent Floor is pushed back as to create a terrace on top of the dwelling below: the building a ‘stair’.

Traditional balconies tend to be stacked above one another and as such obscure the sky. The advantage of the stepped typology is that the terrace features optimal exposure, in principle all day long; there is no ‘ceiling’ hovering over it.
Planters are ‘absorbed’ in the floor thickness: they are flush with the terrace. The ‘flowerpots’ are not an additional element, but integrated in the facade.

The greenery will be owned by the homeowners association and will be hand picked by a landscape architect. The residents can choose a specific color palette to their liking. A collective vertical park comes into being. The carefully composed foliage will form a kind of ‘veil’, a fragile filter between the building and its surroundings. Each floor articulated by its own floral cornice.

The access is on the North side through open-air galleries. Pushing back each floor also has positive effects on this side of the building. The protruding walkways offer a form of additional shelter and the arched profile adds attractive plasticity to the streetscape; the silhouette becomes sculptural.

The interface between the dwelling and circulation space will be transparent and generous due to large windows.
Horizontal bands of micro-concrete run all along the building, integrating the flowerpots and galleries.
Each facade fragment between these bands will be made of fitting materials. The south facade fully glazed, the side facades light grey masonry and the north facade alternating glass in bronze frames and wooden panels that hide the rain pipes. Nice and clean.

The specific organization of Klencke allows for a spectrum of different residential types with distinct sizes and characteristics.
The majority of the houses will be compact. In spite the modest sizes the apartments feel spacious through the specific floor plans with a central core containing the wet areas, the kitchen, technical facilities and storage spaces that allow long sight lines. And through the extensive quality of the big windows and large balconies.

The lowest floor on the south side features single-sided, extra-wide units with an extra large terrace.
On the street side rooms with additional height are positioned on ground level connecting to a slightly lifted deck. The ‘porch’ forms a buffer between the dwelling and the public space and aspired to catalyze street life. These dwellings in two stories and are accessible through a corridor and directly from the street. 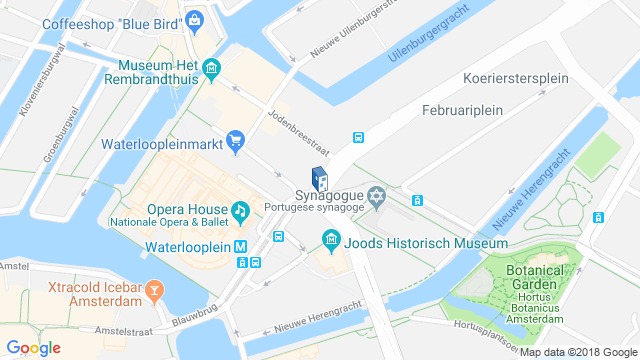 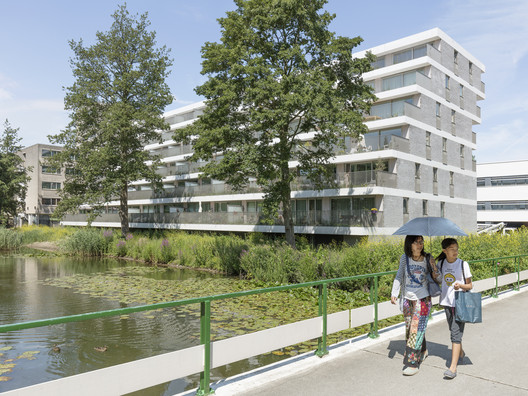