Designed as a new landmark in Manchester, the tower would stand 500 feet tall but less than 45 feet wide. Student Castle consulted with Historic England and design panel Places Matter over the proposed height prior to submitting plans. Student Castle founder Edward Cade has said that “The building presents a significant windfall opportunity to redevelop a portion of an existing multi-storey car park adjacent to Manchester Oxford Road station into a fully managed purpose-built student residence.” Deloitte is the planning consultant for Hulme Street, while AECOM will be the project manager.

Glenn Howells director Dav Bansal said, "Rising among its context of red brick warehouses, the scheme will be the most slender structure in Manchester. The slenderness is reinforced by its homogenous skin of brick panels that alternates on every floor to open up glazed slots and add relief to the façade. The use of modern construction technologies will enable us to deliver traditional brick material at such heights in prefabricated modules."

Alan McCartney, Studio Director for Glenn Howells, said that “The design's proximity to local universities, transport hubs and the city core makes the site location ideal for an emerging student development, combined with an ambitious vision to design high quality student living where students would want to live. The provision of SME incubation space also offers opportunities for small businesses to have an affordable workspace.” GHA were appointed to undertake design proposals for the site on behalf of GMS (Parking) Ltd.

Construction is scheduled for completion in 2022. 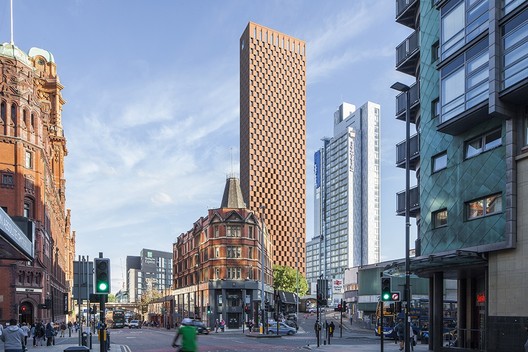