Text description provided by the architects. Located at the entrance of the entire village, this house is the first building in sight when entering this ancient Huizhou village. This tiny sweet piece of architecture was originally used as a small pharmacy store with an area of only 80㎡. In order to receive growing number of tourists, we renovated her into a reception center for the entire village. The design requirements are simple: in order to coordinate with the overall environment, it’s not allowed to be bigger, taller or abrupt. However, she still needs to bear the iconic role of the entire ancient village at the entrance spot.

During the concept phase, we don't want her appearance to be smeared exaggeratedly as a cyber-celebrity, but a local girl who reads poetry. Therefore, the renovation still uses the local Huizhou architecture language of Matou Wall. When the frontal three folding doors are fully opened, you will be thrilled to discover the hidden but beautiful space inside.

Different from the traditional timber carpentry work in the Jiangnan area, the timber structure of the ancient Huizhou area is characterized by “thick beam and slim column”. Therefore, in order to make the columns appear slender, the original bulky column is cut down into four thin columns and becomes a group of "separated columns". At the same time, in order to increase the stability and rhythm of the beam, one beam is replaced by a pair of beams lying side by side. Though the traditional “square-beam-and-square-column” structure doesn’t have the tenderness and beauty of the round ones, it has the highest structural efficiency. All the beams and columns are snap-fitted together by mortise and tendon joint structure, forming a roof truss of separated-columns and complex beams --"the overall timber structural carpentry system".

Western classical architecture organizes architectural forms and proportions with “order of pillars” as the core, while Chinese timber structures have always emphasized the systematic nature of beams and columns as a whole. Although Chinese architecture does not emphasize precise proportions, it pursues the spirit and rhythm of the overall space, the creation of which is closely related to the timber structural system. The structure is no longer a negative factor that needs to be concealed in modern architecture, but an important skeleton to create the spirit and rhythm of the overall space.

Walls
The timber carpentry structure defined the dimensions, while the wall determines the interface and visual elements of the whole space. Wall of Shadows: for the Chinese people, bamboo is not only a favorite object, but also a spiritual symbol of literati temperament. Almost everyone loves bamboo, but bamboo cannot survive indoors so the Chinese try to fill the interior with its replacement by means of paintings and carvings. In Clan Hall X, we project the bamboos growing outside onto this translucent glass wall through light and shadow. The entire interior is filled with bamboo shadows whirling in the wind.

Wall of Virtual Separation: The “horse head wall”, known as “Matou wall”, is the iconic symbol of traditional Huizhou architecture. It was used for fire prevention and later became a unique language of regional culture. Matou wall provides a feeling of mystery and shelter. However, as a public reception center, we hope to retain this Huizhou architectural language and at the same time to get rid of the sense of isolation given by these walls. Therefore, we constructed a whole interface of horse head wall made of modern glass brick as a virtual separation between the inside and outside. Suddenly the building has an interesting change that the inside wood carpentry structure is presented to the outside with skilled and magical craftsmanship.

Wall of the Tree: The west gable wall is the only solid wall in the building so as to enhance the dramatic effect of flipping the inside and outside. Specially, we picked a curved jujube tree from the nursery garden 800 km away. Once the tree was cut down, we planted a new seedling next to it. This beautiful curved jujube tree was then transported back and hung on the wall without any decoration. The wood structural system made of jujube trees and the unmodified original jujube trees are placed in one space. Facade and nature, virtual and real, inside and outside, curved and straight, the interior then acquires a sense of balance, just like a kind of antithesis relation in traditional literature.

This practice may be questioned by environmentalists. But in fact, we believe there are two life cycles of trees. One is the natural life that grows in the woods, and the other is the artistic life that people use as materials for construction or furniture, so that their lives can be prolonged in the artistic sense. In addition to this reception center, we also did a series of renovations that we called “minimally invasive surgery” in this village, including an inn, a tea house, a bamboo pavilion, a bamboo bridge, etc. We don’t intend to alter the appearance of the village completely, which may cause huge changes of its context or even aborigines. Instead, we hope that through the approaches of "small actions and big mind", the charming village will shine again with glowing beauty. 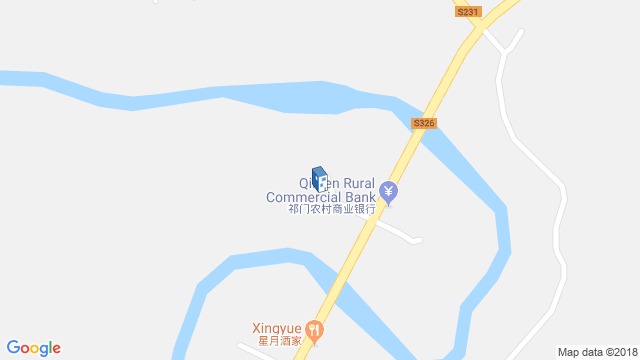 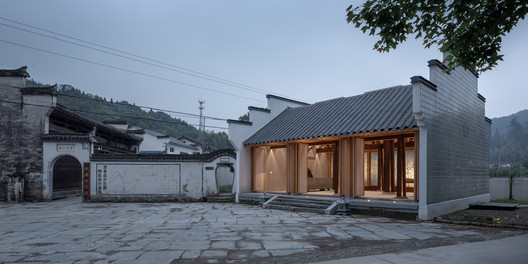