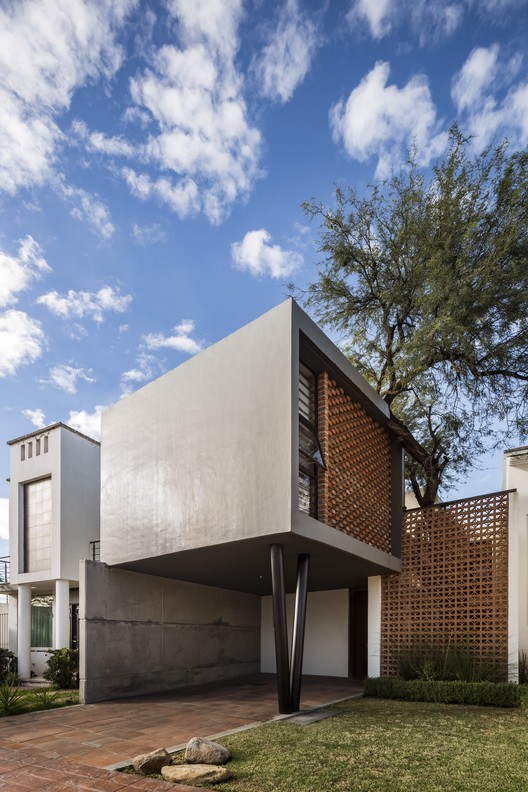 Text description provided by the architects. The project’s protagonist it’s a great mesquite wich already has been growing in the land, the site has a much longer than wide proportions, therefore, and it was decided to enlarge the promenades inside the house in order to have the largest amount of living space, but withouth residual spaces.

This project was an exhaustive exercise of integration between the mesquite with the house, where the result was a synergy between the natural environment and the building, as well as a constant interior-exterior relationship. In this way we choose to respect the tree entirely without touching it or wrapping it , which resulted in a diagonal axis that gives us the longest side of the site, generating a deconstruction of the most common house typology in the area which is characterized by a parking space in front and a courtyard garden in the background, In this case the diagonal axis of the project gives us the opportunity to create two open gardens on the sides, separating us from the adjoining areas and giving lighting and ventilation to the whole house.

Following with the desire to incorporate the tree to every single space inside the house, a terrace emerges in the upper floor whose shade is generated by the foliage of the same tree, being able to live the element from all angles, taking the analogy of the "little tree house" that many of us dreamed of as children, this is a house made to contemplate the tree and live along with it.

The main materials of the project are in general terms concrete, mud and glass; elements that we relate to the stone, earth and air that are the essence of the site. Nevertheless, these become architectural elements that provides the house with a very cozy atmosphere.

The apparent concrete walls, the bridge and the concrete floor on the ground floor, seek timelessness and in turn give prominence to the vegetation of the side gardens and the tree itself. It also has been sought to incorporate traditional elements of mexican architecture such as mud lattices, zotehuela tiles, vaults and handcrafted mosaic, evoking the memory of the home.

The architectural program is easy to read and the paths are very functionals, on the ground floor we have the social area with a double height and an very open space, a fairly large kitchen with an island that serves as a dining room. And to the sides we have the gardens that allows to expand the interior space but also allows us to always keep in mind the view of the mesquite from different frames.

Upstairs we find the private area with two bedrooms that are connected through a bridge from which we can appreciate the spaciousness of the social area through the double height with the vaults.  These rooms share a terrace already mentioned, and through which we can have a direct dialogue between the tree, the person and the sky, being perhaps the most intimate space.

The façade closes to the west to protect the sun from the southwest and breathes through the east, illuminated by the morning sun. Towards the street we have a volume that is supported by a pair of inclined columns and by a concrete wall, again we have an analogy of the tree that emerges from the earth and is covered by its foliage; on one side and coexisting , we have the great tree in the foreground partially dressed by a lattice that from the outside allows us to appreciate it but leaves some mystery to invite you to explore the space from the inside. 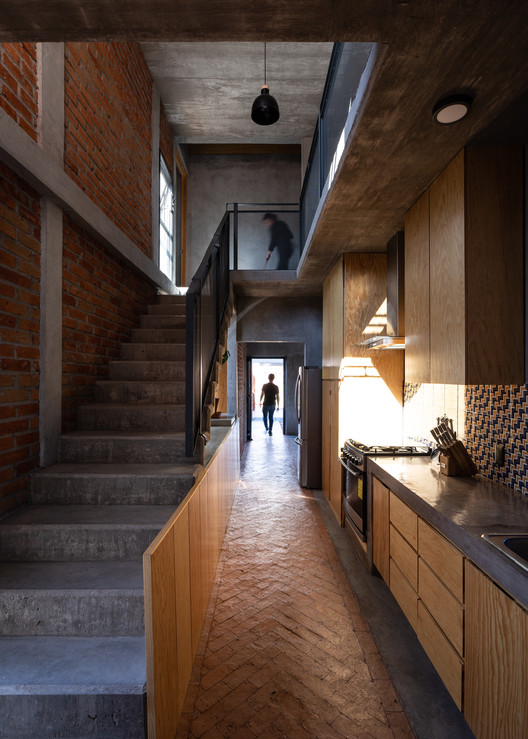