Chinese cities have been on a stride for decades, and are expected to become the world’s leading economy within the next few years. With all the ongoing architectural developments, nature remained key in most architects’ design developments, honoring the Chinese landscape and integrating it within their projects. The Zhangjiang New District is one of China’s new ongoing developments, housing numerous structures and architectural installations. Architecture firm UM has been selected to design the “City Gate,” a new iconic landmark in the New District, which will act as a transition between the extensive urbanism of Gan Zhou and its surrounding nature.

One of the main purposes of the project was to create an environment that caters to both the residential and commercial needs of the region, making the best of the project’s prominent location. The project, which was inspired by Ximeng Wang’s “Thousand Miles of Mountains and Rivers,” a timeless piece of Chinese art, reconnects the occupants with nature and allows them to experience its offerings with all their senses. 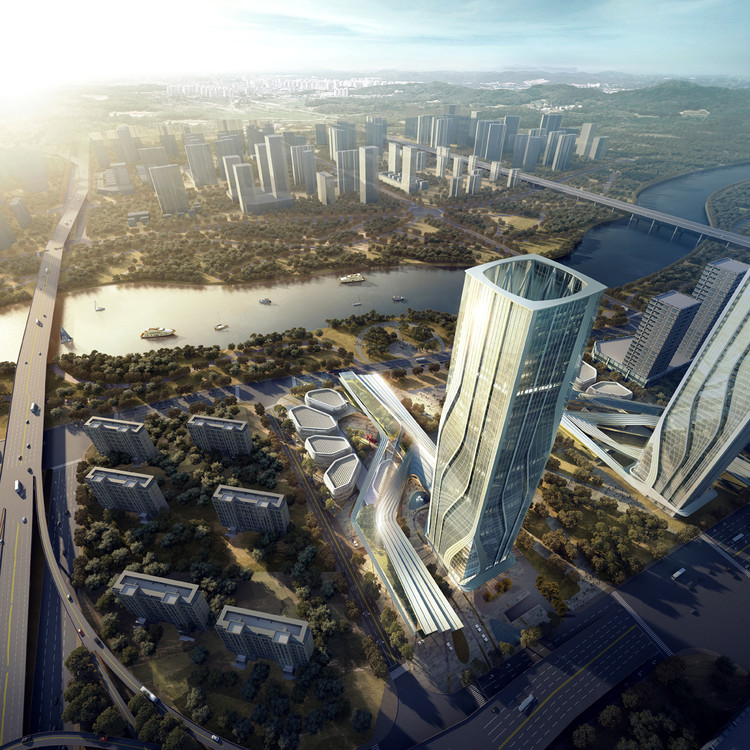 The Zhangjiang New District has been witnessing grand architectural developments and installations for several years, with projects such as West 8’s Garden of 10,000 Bridges and Zhangjiang Hi-Tech Park Northwest District Urban Upgrade, the city is gradually becoming a cultural and economic hot-spot.

The architects at UM drew inspiration from Earth’s topography and natural resources and translated the abstractions of these dynamic forms into nature-inspired architecture. Primarily, the architects wanted citizens to flow gradually into the space, which is why the entire site follows the grid of the adjacent streets and mimics people’s movements. The 111,900 square meter project, which will be built in 2019, is divided into three individual units: the main buildings, podiums, and a semi-covered public space, each inspired by a specific natural element and caters to a specific function.

“The architects borrowed design language from the nature and transferred the forms of natural elements, such as mountains, rivers, and rocks into architectural expressions in an abstract way. Through establishing a dialogue with natural surroundings, the design performs as a transitional space in-between intensive urban settlements and the nature.”
-UM Architects

The main high-rise building is contoured with curvilinear lines on the facade, which is an abstract translation of rigid mountains covered with waterfalls. Nature’s organic lines continued to be the inspiration behind the project’s design as it was also implemented onto the podiums’ architecture and public gathering spaces. The interior circulation of the site harmoniously wraps around the project, optimizing the pedestrians’ experience. The designers chose to cover some public areas with a large canopy which adopts the same design methodology and blends in with the surrounding landscape and urban planning.

The project is set to include offices, high-end hotel building, apartment complexes, commercial units, public plazas, and other public services. 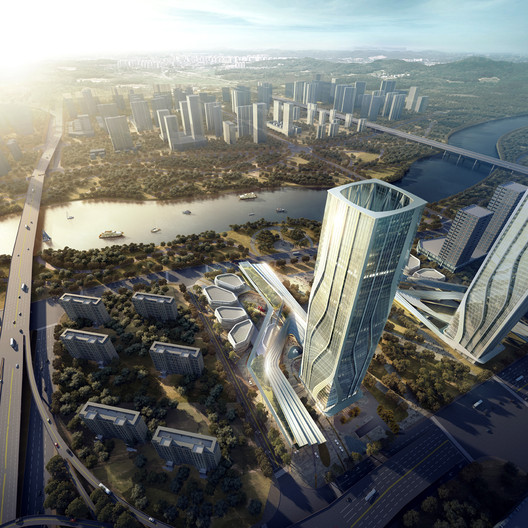