Throughout the design process, priority was given to the preservation of 38 existing, highly-prized, highly-sensitive beech trees on the site, and to a scheme which “not only meshes with the city but also engages in an open dialogue with the neighborhood.”

The exhibition hall is designed as a covered, lockable, versatile square capable of hosting trade fairs and concerts, while also transforming into a covered public space between activities. The beursplein (exhibition hall) and congresgebouw (conference building) are linked by a common entrance, and can be used simultaneously or as two separate facilities. The exhibition hall is organized horizontally, thus highly connected to the outside, while the conference building is stacked vertically, capable of accommodating over 500 people.

The news comes one month after Eduardo Souto de Moura was awarded a Golden Lion at the 2018 Venice Biennale, where he also contributed to the Vatican’s first participation at the event. 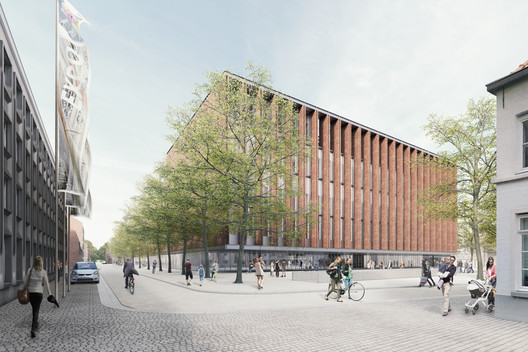