An examination of plans from the archives of the Foundation Le Corbusier in Paris revealed that the Berlin apartments were originally intended to be identical to those in Marseille. However, a dispute between the Berlin authorities and Le Corbusier likely resulted in the interiors being altered beyond recognition from their original design by a 1950’s design team in Berlin.

For the apartment’s renovation, the ceiling light has been lowered by 24 centimeters, from 2.5 meters to 2.26 meters, while the kitchen and stairs were removed and replaced by ones auctioned off from the Marseille scheme. Paint colors were chosen in line with Le Corbusier’s paint chips, while lamps and furniture were chosen from studying photographs from model apartments in 1952, adorned with Corbusier books purchased from antique stores in Berlin, Marseille, and Paris.

The project seeks to make Le Corbusier’s ideas and theories accessible, from his five points of architecture to his color theory and furniture design. Apartment 258 has been visited by architects from around the world since its opening in 2018, with a buyer found in order to sell the apartment as a complete design-build project. 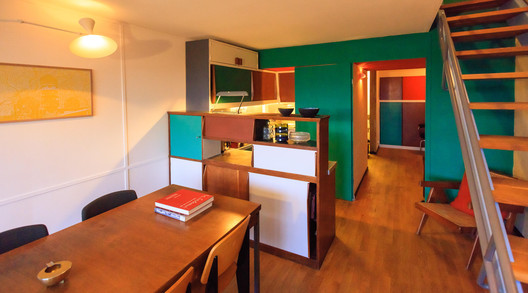