The idea behind Tentative is a compact, all-in-one emergency shelter suitable to any terrain or climate. Consisting of a weather-resistant textile that is quilted together, Tentative holds insulating perlite sandwiched between layers and held by an aluminum frame. The roof collects water, as well as providing lighting and ventilation, while the floor is made up of heat-insulating recyclable composite decks. When compacted, the shelter is easily transportable at 4 meters long, 2 meters wide, and only 30 centimeters tall, growing to 2.5 meters tall when at its full size.

Inspired by the hexayurts at Burning Man, Christian Weber designed the Shiftpod, a reflective, insulated, wind-resistant tent that can also come with care kits, first aid, and water filters. His company, Advanced Shelter Systems Inc. (ASSI), has donated Shiftpods to refugees in Greece and the homeless in Hawaii, among others. “Our goal is to set up kits for individuals to take with them that have a shelter, water filtration, and everything you need for a family of four to survive for 30 days,” Weber says. “And to build systems for up to 1,600 people [that can be stored] in one container.”

Abeer Seikaly's conceptual emergency shelter is composed of "high-strength plastic tubing that is molded into sine-wave curves and woven into a stretchable fabric membrane, a technical, structural fabric that expands to enclose and contracts for mobility." The hollow tubing allows for services such as heat, electricity, or running water and are able to adapt to various climatic conditions. Seikaly poetically describes her project stating, “Refugees carry from their homes what they can and resettle in unknown lands, often starting with nothing but a tent to call home… In this space, the refugees find a place to pause from their turbulent worlds, a place to weave the tapestry of their new lives.”

Students Lucas Boyd and Chad Greenlee designed a proposal of pop-up churches, synagogues, and mosques for those fleeing conflict in refugee camps. They believe that, "While [places of worship] do not provide a basic need for an individual’s biological survival, they do represent a fundamental aspect of not only an individual’s life beyond utility, but an identity within the collective, a familiar place of being—and this is something that we consider synonymous with being human—a requirement for the persistence of culture." By distilling the iconography of sacred spaces, Boyd and Greenlee have created minimal yet easily recognizable sacred spaces. Pop-Up Places of Worship embody the importance of focusing on the emotional needs of those displaced, rather than simply a physical shelter.

Similarly, Shigeru Ban's Cardboard Cathedral creates a space for the community and a sense of familiarity for the residents of Christchurch, New Zealand, following the earthquake in 2011. Acting as a temporary replacement for the city's 1864 Anglican cathedral, the building has an expected lifespan of 50 years and is said to be one of the most earthquake-safe buildings in Christchurch. The simple A-frame structure was created from cardboard tubes and steel shipping containers. Shigeru Ban praises the qualities of recycled tubes as a material for disaster relief, stating that "the strength of the building has nothing to do with the strength of the material. Even concrete buildings can be destroyed by earthquakes very easily, but paper buildings cannot."

Following the 2008 Sichuan Earthquake, where an estimated 80% of the buildings in the affected area were destroyed, further landslides in the Jintai Village area also caused damage to newly built homes. The Jintai Village reconstruction included twenty-two houses and a community center, with its goal to reconstruct a community and raise morale. The project shows how post-disaster architecture can be used as an opportunity to improve existing conditions. The Jintai Village reconstruction demonstrates new uses of local materials, a green stepped-roof, biogas technologies, and accommodation for chickens and pigs with a strong focus on sustainable design.

After the town of Constitución in Chile was hit by an earthquake in 2010, most of its buildings were destroyed. The architecture studio ELEMENTAL, led by Alejandro Aravena, was tasked with creating a master plan to house those displaced. He came up with Villa Verde, an entire area populated by two-story "half houses," which left the other half to be constructed by residents. Concrete foundations, plumbing, and electricity were completed for the residents, while the rest of the structure was left for them to build. This was created with the intention that residents would build a more suitable home than one constructed by government funding. Villa Verde represents an innovative way to approach a long-term solution for low-cost housing.

The Home-For-All Initiative was constructed after the 2011 Tohoku Earthquake and Tsunami to build small community centers for those living in temporary shelters. Due to radiation level concerns, children were restricted from playing outside, thus the Soma City Home-For-All was conceived. The building was designed in the image of a large straw hat kept afloat by trees to create the impression that children were playing in a park outside. The structure highlights the importance of creating community areas that serve the public, with the Soma City Home-For-All focusing on the playful experiences of kindergarten children.

In 2016, an earthquake struck central Italy resulting in the loss of hundreds of lives and centuries-old architecture. The small town of Amatrice was at the center of the destruction. But, with the help of architects such as Renzo Piano and Stefano Boeri Architetti, a long-lasting canteen was able to be constructed in only a few weeks. Stefano Boeri remarked that the efforts proved, “that even in an emergency, it is possible to deliver things of quality that are destined to last.” It displays the power of collaboration in creating post-disaster architecture, with donations received from all over Italy and the architects themselves. 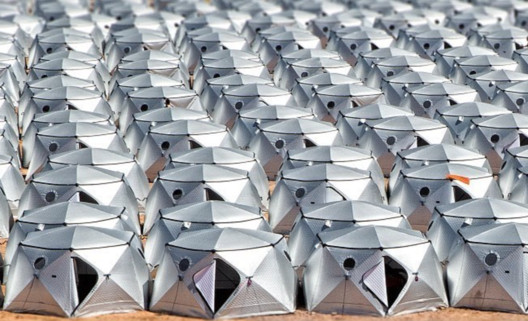