All
Projects
Products
Events
Competitions
Save
Atelier Deshaus: "The Idea Is Not to Create an Object But to Construct a Path"
Share
Or
Copy

In China's newly emerging constellation of famed architects, few firms elicit the sense of surprise caused by the work of Atelier Deshaus. With projects ranging from awe-inspiring to humble, their work does not adhere to any stylistic rules, but all of their projects exude an enigmatic aura. In this interview, the latest in Vladimir Belogolovsky’s “City of Ideas” series, principals Liu Yichun and Chen Yifeng discuss the role of identity in their work and how they try to connect their buildings to the landscape.

Vladimir Belogolovsky: Is it true that you each design different projects in the studio? Why is that?

Liu Yichun: This has been true since 2010. Before that we always designed everything together. We used to have endless discussions and too many disagreements and arguments. That’s why we decided to pursue two parallel paths. This approach led to greater efficiency and it helped us to formulate clearer ideas of our independent views of architecture. It also helps us to diversify our work and to avoid forming one recognizable style.

Chen Yifeng: It is important for us to express our solutions differently, even though, fundamentally, we are working in one direction and pursuing one family of ideas.

VB: How would you describe the intentions of your work?

LYC: We try to go beyond a particular program. We work on integrating the manmade with the landscape and focus on what we call “objecthood” and “situatedness.” In other words, we don’t just see architecture as a pure sculptural expression but as a direct response to a complex juxtaposition of many layers of specific conditions such as the site, program, culture, and other meanings.

CYF: We concentrate on doing public architecture rather than commercial architecture by focusing on two main categories: exhibition spaces such as museums, and educational projects, mainly schools and kindergartens. We avoid working for commercial developers on such projects as offices or residential, as they are mainly about the market and maximizing profits. We are not interested in that.

VB: You seem to avoid composing your buildings into freestanding, clearly defined objects. Your architecture seems to refuse to be defined by clearly perceivable edges.

LYC: The idea is not to create an object but to construct a path. Our projects are not about proposing new forms but about how they are explored and experienced. They are about space and movement around, inside, on top, and through it, without any particular sequence. And often it is not clear where the entrance is; you need to discover it. A building is a path. You encounter and experience it before you realize that you are already inside of it. A building turns into a landscape and landscape turns into a building.

VB: Speaking of perpetually evolving urbanization in China you said, “We are confronted with the process of drastic urbanization; the surroundings are always unknown. Even if there is planning, it is always subject to unpredictable and constant change. Eventually, we have to resort to our own totality.” You just compared your buildings to landscapes, but these landscapes seem to be quite autonomous; they float independently of the context around them and they establish their own context, right?

LYC: We try not to tie our projects directly to the context since, as you said, it is typically in flux. But we always engage with the outside and try to create many opportunities for observing outside or engaging from inside and we are interested in these dialogs that often evolve beyond our control. We use our architecture to express and embrace this uncertainty, not to escape from it.

CYF: Many of our projects are built in suburban areas with no context and we are often forced not to respond to the context but to create it. Sometimes we decide to isolate our buildings by creating a boundary to protect them from the constantly changing environment.

VB: In one of your texts you said, that you “believe that pragmatic solutions related to contemporary architecture in China require a rational approach that is linked to a personal touch.” Let’s talk about this “personal touch” in more detail. What do you think differentiates your work from other architects?

LYC: We don’t focus on creating our own identity. We simply work on projects, hoping that our identity will come through. Architecture for me should manage three things: first, it is designed to be used. Then, it should be suitable for the site. Lastly, it must be emotionally touching. The solution might be varied for each project, but each one reflects its time, place, and use by people.

VB: You said something quite interesting, “Constructing a new place and experience is a task that every good architect should complete.” Would it be accurate to say that in each of your works you intend to provide a unique experience? Could you talk about your process? What are some of the questions that you ask?

CYF: We focus on pragmatics and specifics. We work on creating experiences, particular views, and so on. Our focus is not on newness, but on being suitable and specific. For example, in the Spiral Gallery project, the question we tried to answer is how to see the outside. So, we came up with this up-down route for the users to have a closed-open-closed experience along the way, as a better way to visually connect with their surroundings.

The Huaxin Wisdom Hub is another story. The environment is not exactly pleasant at the moment, so we created a wall to separate our building from it. But the wall is not completely closed, rather it is somewhat “floating” above the ground, contributing to the resultant state of ambiguity and uncertainty.

LYC: There are two things we care about most. One is how a building assumes its relationship with its own site, whether it is cultural, contextual, or visual. The other one is more relevant to modernity, issues that are global and shared by all people.

VB: Being one of the most original architecture offices in the country it is hard to believe that you are not focused on newness. You seem to downplay your role as creative authors. But let me assure you that your Long Museum and many other of your projects propose something I haven’t seen before and that is probably because you set that as your goal. You are pursuing architecture without relying on any established rules. You are setting rules up yourselves. Your buildings are like nothing I have ever seen before. How can that be achieved simply by trying to solve things pragmatically?

LYC: You are right, our architecture is about newness. But the new is the result, not the starting point. Primarily, we focus on context and program. The new is a subtext. But sure, it is there. It is the focus on the specifics that leads to something new, not the other way around.

CYF: What leads to a unique solution is our recognition of something particular and unusual in the site or program. Unique conditions lead to unique solutions. We are aiming to create unique atmospheres in each project. These atmospheres have to have memories of the past and look into the future at the same time.

VB: Your Long Museum is based on a pattern of repeated forms that you call “vault-umbrellas” or umbrella columns that mimic an existing ruin on the site. Since the Long Museum is an art institution its program is not very precise, as far as spatial requirements. Would you say that you designed this building as a ruin, somewhat independently of its function, imagining how the structure may look in the afterlife of the museum?

LYC: Absolutely. The goal there was to achieve a certain freedom, a sense of eternity. I think a ruin is a kind of space that offers freedom and is associated with eternity. The project was more about the space itself, not simply a response to the museum’s particular need.

LYC: Sure. Architecture should be thought of as art. Finally!

CYF: Of course, architecture as art is our goal. If it is not art then it cannot be called architecture.

VB: Is there one particular building in Shanghai built in recent years that you enjoy most?

LYC: Our Long Museum! [Laughs.] Well, for us it is very important and enjoyable. In a way, it has become our starting point, as it incorporates many of the ideas and interests that we experimented with in various projects but never so holistically.

VB: If you could meet any one person in history who would that be?

VB: And what would you ask them?

LYC: We always ask the same question—what is architecture? We think it is important to ask this question continuously.

CYF: And we don’t want to come up with the same answer every time. Every situation and every moment in time requires different solutions. 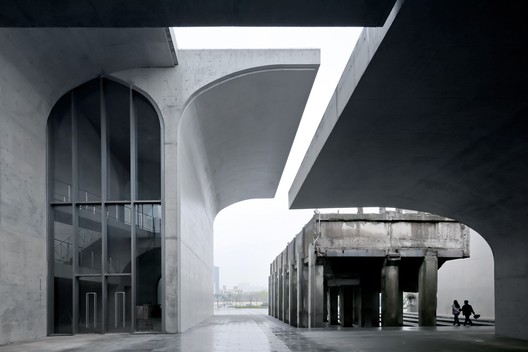