KTK-BELT Studio, a not-for-profit organization based in rural Nepal, is currently working with local communities to create a fascinating "Vertical University," which will teach students about biodiversity and environmental conservation in 6 "living classrooms" positioned along a vertical forest corridor that stretches from 67 meters above sea level to the top of an 8,856-meter peak. These 6 stops encapsulate the 5 climatic zones of Eastern Nepal: tropical, subtropical, temperate, subarctic and arctic.

The project explores the specific impacts of climate change in each climatic zone, creating “classrooms” where students can walk from Koshi Tappu to Mt. Kanchenjunga, the third tallest peak in the world, and learn onsite from indigenous farmers about the biological diversity of each area. By teaching place-based skills in these micro-conservation hubs, the project aims to conserve and activate local knowledge. Each of these “classrooms” responds to the visual and cultural cues of its unique landscape, with one campus focusing on a flood-proof design in a heavy monsoon area, and another mimicking the semi-nomadic lifestyle of local yak-herders. 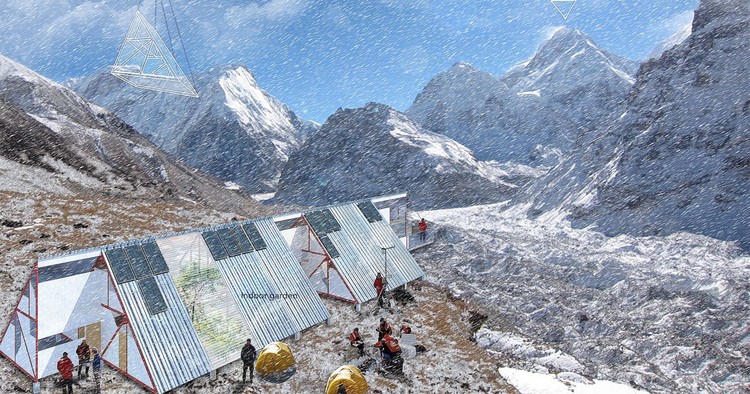 Nepal is a global diversity hotspot, harboring 9.5% of all bird species and 8.9% of all bryophyte species (mosses and similar plants) in the world despite the country comprising less than 1% of the world's landmass. This mega-diversity of species is currently severely threatened by the effects of climate change, which include landslides, flooding, glacier lake outburst floods (GLOF), invasive and alien species, and the degradation of wetlands, which threaten both the unique landscapes and the livelihood of 19 million smallholder farmers.

The Vertical University focuses on the biodiversity and the effects of climate change in each specific zone, with classrooms, eco-guest houses, a training hall, library spaces and workspaces in each campus. These programs are not only for the students, but also accessible by the local communities surrounding the campuses through the BELT farmers program and the BELT schools program. The community is provided with educational and training opportunities to learn about their local ecosystem, as well as techniques to adapt to a changing climate.

At 67 meters, the first campus is situated next to the Koshi-Tappu Wildlife Reserve, recognized as one of the 27 important bird areas of Nepal. With around 485 bird species sighted in the area, including watercock, Indian Nightjar, dusky eagle owl and black-headed cuckoo shrike, as well as over 200 fish species and 514 plant species, the area is rich with critically important flora and fauna.

As a highly accessible and flat region, it is experiencing major urbanization pressure. During the monsoon, this region also undergoes major floods, with a flood in 2008 displacing over 60,000 people. Adopting a flood-proof design, the architecture combines a lightweight bamboo structure resting on a stone gabion wall base. The triangular plinth rises above the ground, acting like a prow of a ship to protect it from flooding. The landscape intervention around the building also acts as a biodiversity hotspot.

Churia, or the Siwalik hills, are one of the most threatened regions of the country, with 15% of the population residing there. The land consists of sand and gravel, playing a critical role in recharging the groundwater system of the entire Terai region. However, dangerous sand mining and increasing deforestation are leading to an increase in flash flooding disasters, as well as landslides downstream.

In this second campus, building techniques such as geotextiles and gabion walls are used to ensure control of soil erosion. The master plan focuses on the stabilization of the nearby stream bank as well as proper water management. It has been developed to leave room for the planting of endangered trees and plant species.

Between 2010 and 2015, more than 150 natural springs partially or completely dried up in this area due to climate change in the Eastern Himalayas. This has resulted in out-migration, with a loss of more than 25 species of fish which previously provided the main livelihood source to local fisherfolk, as well as other agricultural and health challenges.

The campus is envisioned as a large water-harvesting infrastructure, where every roof and courtyard contribute to the collection of water which will be stored in underground tanks for the dry season. It will consist of an info point or meeting/exhibition space, flexible classrooms for training, research spaces, office spaces, and artist residencies.

Situated on the eastern edge of Makalu-Barun National Park, this area is one of the most important—and most threatened—biodiversity hotspots in the eastern Himalayas. Due to its remoteness, it has been a critical center of evolutionary novelty and species unique to the area. The region is increasingly threatened by road construction and rural land grabs, poorly conceived hydropower projects, and a lack of institutional frameworks for mitigating negative impacts of land use charge.

The Khandbari campus is located in the urban hub, and works to demonstrate alternative urbanism approaches, from the use of green roofs to climber walls and rain-harvesting techniques.

Thudam is a village located at the intersection of three trekking routes to Upper Arun, Kanchenjunga, and Tinjure Milke Jhaljhale regions. It is home to a number of culturally important products, such as a type of radish called Bhote Mula, hard cheese, butter, and dried yak meat.

Located in a subalpine region, the campus will consist of a monitoring station at a 3600-meter elevation. Mimicking the semi-nomadic nature of the yak herders of this region, the architecture of the campus consists of a yurt-like structure made of bamboo and canvas. It will also include a greenhouse to demonstrate how to grow food at such a high altitude with scarce water resources.

The final stop in the Vertical University is at Mt Kanchenjunga, in the “roof of the world,” the Himalayas. With the region containing one of the largest freshwater reserves in the world in the form of glaciers, it is directly threatened today by global warming, increasing urbanization, and geopolitical conflicts. If the temperature continues to rise, the glaciers will melt by 35% by 2050, causing huge changes in the lives of the 1.3 billion people living within its catchment area. In Nepal, a landlocked country between India and China, the threat of the melting glaciers is immediate, impacting the country's only source of freshwater as well as increasing the risk of glacial lake outburst floods.

The focus of this campus will be on the research of the impact of climate change on glaciers. A climate monitoring station will be housed in the research facility, along with research residencies, greenhouse, and other classroom facilities.

The Vertical University project has won the What Design Can Do (WDCD) Climate Action Challenge, the SEED Public Interest Design Award 2017, and the Energy Globe Award for Nepal 2017. KTK-BELT was also named a finalist for the prestigious Buckminster Fuller Award, Echoing Green, and Katerva Award for the Environment. 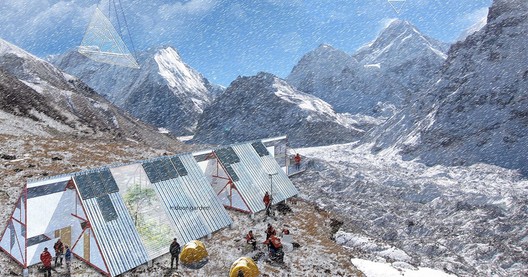