The 66 residences of Eighty Seven Park, ranging between one bedroom and five bedroom units, feature wrap-around balconies equipped with large glass doors, capitalizing on views of the Atlantic Ocean, Miami skyline, and North Shore Park. To complement the residential program, the scheme will feature a variety of amenities, including a wine cellar, two swimming pools, and a relaxation spa.

For the scheme’s interior, Piano collaborated with RDAI to create a palette inspired by nature, featuring pebbles, shells, leaves, and grasses collected from the surrounding area. Light oak flooring evokes the color palette of aged sea grape leaves, while Venetian terrazzo floors are inspired by the white sand of Miami’s beaches.

The palette created for this project was inspired by the surrounding natural elements of North Beach. Capitalizing on the architectural vision of Renzo Piano Building Workshop, we wanted owners of this building to feel that they were one with nature from their first step inside.
Denis Montel, Artistic Director of RDAI

Residents of Eighty Seven Park will also have access to a private two-acre park designed by West 8, featuring terraces, gardens, lounges, and an outdoor pavilion. West 8 has also designed series of public and semi-public spaces to accompany the scheme, including a redesign of the 35-acre public North Shore Park. The balance of public and private landscaping work underlines the scheme’s effort to engage with both the future residents of Eighty Seven Park and the wider North Beach community. 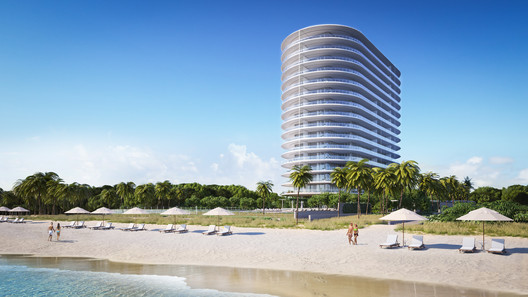