Text description provided by the architects. Around 600 B.C., King Nebuchadnezzar II of Babylon made a garden for his wife Amitis of Media Kingdom in the midst of desert, noticing she got homesick longing for her country’s forest. It is said that the garden was a "hanging garden," that was built not on the ground but on a structure like terraced balconies. The garden was designed so well it felt like walking on regular ground. It is also said that water was drown from the far Euphrates River through water pipes, to continuously feed the plants in its garden. Probably all the advanced techniques of the time were used. Power of love created a garden hanging over the sky in the middle of the desert. It is regrettable that nothing remains, but still it is such a romantic story. This story became starting point.

In Seoul, ‘Hongdae district’ is quite an interesting place. Gone are the atmosphere of the art school, the historical feeling from the old facilities and the ambience of residential area, and the area has turned into a noisy and complex district all of a sudden. Fewer and fewer people reside around the area but the station is packed with visitors. People who visit Hongdae claim they are there for the culture, but desertification of any culture continues.

An area which were clustered with houses that had ample gardens, has turned into an area filled with cafes, bars, fashion stores and galleries. In the middle of the region was our site with a large garden. During the design process, we talked with the owner about this phenomenon and came up with the idea of Amyitis' garden, with balconies on each floor and a multi-level garden on the roof. Although there are variety of urban solutions, I thought it would be a good idea to start with planting trees and grass, the most common and logical method for desired repose.

The building with its exposed concrete finish, looks like a boulder. and this is associated with an image in which green grass and trees grow between crevices. Or it could be a metaphor of an oasis in Hongdae district, a place to take a breath among excessive commercial buildings.

The concept of this building is 'gaps'. A gap can mean a piece of tiny space between the two locations, or it can also signify a little pause between activities. On the front facade from the street, you will find a variety of gaps that leads to the entrance on the first floor, going to the courtyard, or moving to the back garden, or rising to the stairs straight to the second floor. On the opposite side of the site, there are many run-down houses, ranging from studios to rooftop residences. A free-standing wall was set up on this side to divert attention moderately and a  balcony was made between the wall and the exterior wall. Then we made cracks on several spots in the free-standing wall to allow peak into the run-down surroundings.

Terraces and rooftop gardens were installed to create a outdoor space on each floor, using planes that were created on the upper slabs of the car lift and the setback regulation. On the first floor, compositional gaps were also used to create a natural landscaping space on and around various entrances. On the Sunken Garden which reaches the underground level, maple trees that are almost 5 meters tall are planted and they spread out wide branches, making it a spacious and warm basement garden.

In particular, a rear garden with 1.5 meter width was created from restriction law to allow sunlight to the northern lot. This condition reminded us of little school backyards. I remember the narrow, long backyard with decomposed granite. It was a quiet, very relaxed place to hide in. As a result, the rear garden becomes a place free from the complexity and noise of Hongdae. The outer- fence was made of cement bricks stack with straight joints, and a flower garden was placed with birches planted in a row.

The gap on the first floor leads to four doors into the building. One can reach basement level 1 to ground level 3 directly from the street. Some paths are wide, some dark and some narrow. A path goes up the stairs, another goes around bamboo and other paths reach the walls. Wherever you walk, the movement is like going up a mountain and one eventually looks back on the path he/she came at the beginning.

Modern humans are thrown into a system that propels fatigue, where the gap between each other is reduced and everyone is controlled constantly. This is especially true in cities. It is like walking through a maze that is dry and the exit is rarely seen. At a time like this, we need to take a break and look back. Hopefully, you can pause in this building, experience the garden through the cracks, and rest for a while like an oasis appearing in the city desert. 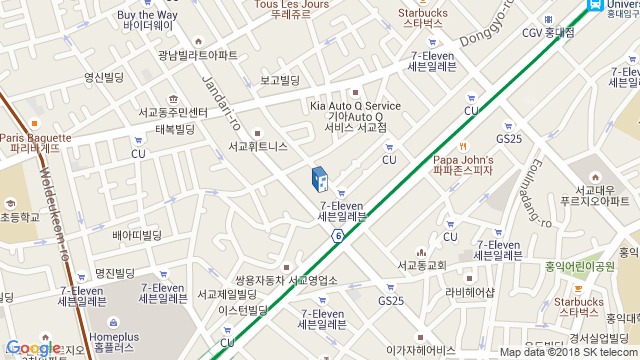 Location to be used only as a reference. It could indicate city/country but not exact address.
Share
Or
Copy
About this office
studio_GAON
Office
•••